THE BENRIACH Distillery Company, owners of GlenDronach and BenRiach, has won an amazing two product trophies at this year’s International Wine & Spirits Competition – both for its BenRiach 12 year-old sherry-matured single malt Scotch whisky. 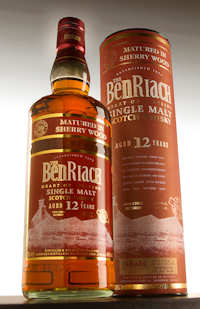 This is the first time in the company’s seven-year history that it has been awarded a trophy by the IWSC.

The IWSC Single Malt Scotch whisky (15 years and under) Trophy

and was also awarded the following medal:

In total, the Edinburgh-headquartered company collected an impressive nine awards this year – two trophies, and various medals - one gold ‘Best in Class’, one gold, four silver and one bronze.

The awards were announced yesterday (July 27) at a ceremony in London. 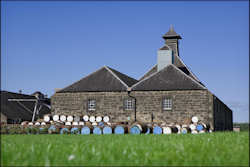 Founded in 1969, the IWSC is the most prestigious competition of its kind in the world. IWSC medals and trophies are the most highly regarded in the trade, representing the best of the best in the world of wines and spirits. The IWSC is judged by a panel selected from 300 fully-qualified, experienced industry judges. Noted for its intense and unrivalled judging process, the IWSC is proud to be the only competition of its kind that conducts a full blind tasting with extensive technical analysis.

BenRiach’s Sales Director Alistair Walker said: “We are delighted to have won these nine different awards – particularly the two trophies. It’s a major achievement for a small independent to make the UK producer shortlist and to win any of the top awards when you consider all of the big multi-nationals which are also participating. Especially pleasing is the fact that there were only six trophies for whisky up for grabs, and we managed to win two of them with the same expression - that is quite special.

“These awards are a tribute to our people at BenRiach and GlenDronach distilleries who lovingly craft the singular taste of our whiskies. It’s also testament to the time and energy we have dedicated towards our wood management programme – with our trophy-winning whisky having been created by combining BenRiach from both Pedro Ximenez and Oloroso sherry casks.

He added: “There are a lot of wine & spirits competitions out there today, but the IWSC still carries a lot of weight in terms of its reputation and history. It has serious credibility, and as such I cannot stress just how delighted we are to receive these trophies and gold medals from the IWSC.

“We actually released the BenRiach 12 year-old sherry-matured as an exclusive for the Taiwanese market a few years back, and only recently started rolling it out into additional markets. I have a feeling some of our local customers will be pushing for a UK release on the back of these awards!”

Tasting notes for the BenRiach 12YO Sherry Matured (46% vol)