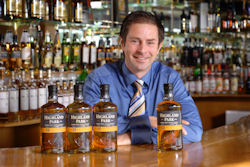 Commenting on his new appointment, Matthew Turner, said: “I am immensely proud to be working on Highland Park - a brand whose heritage, history, whisky quality and reputation amongst whisky lovers and connoisseurs alike is unmatched.
“My vision for Highland Park is to build on the existing success of the brand and to further establish Highland Park as the world's most respected single malt whisky. To achieve this ambition will require teamwork, courage and innovation and I am looking forward to the challenge.”

Ken Grier, Director of Malts at The Edrington Group, said: "I wish Matthew every success in his new position as brand controller for Highland Park. The brand has had impressive growth since we set out on an ambitious £18 million master plan for the spirit in 2005.

“Sales have soared in the past five years, catapulting Highland Park into the world’s top 10 single malt Scotch whiskies for the first time in the distillery’s 212-year history. I look forward to Highland Park’s continued growth with The Edrington Group.”

The Highland Park portfolio is distributed globally with key markets being the UK, USA, Global Travel Retail and the Nordics.