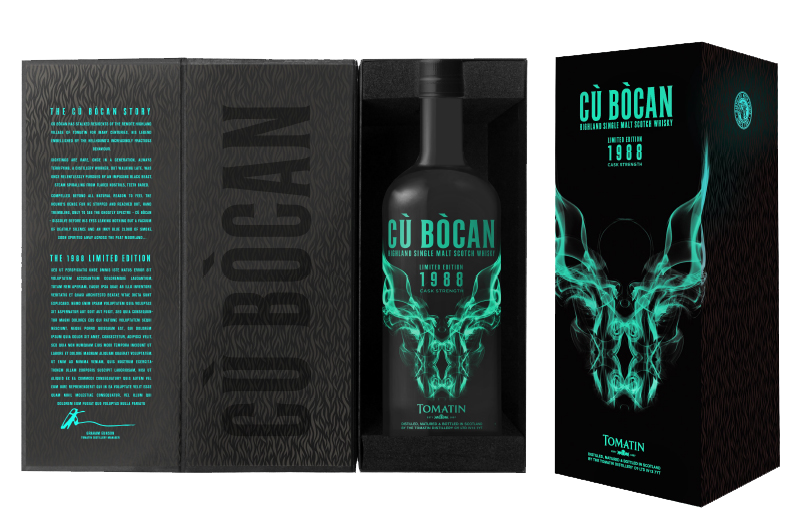 Highland based Tomatin Distillery have announced the launch of a rare Vintage 1988 single malt as part of their Cù Bòcan range.  The casks used to mature the spirit were home to a popular heavily peated Islay whisky in their past lives to create a unique limited edition. Just 2200 bottles of the malt, which have been aged for 28 years in sherry casks, are available.

Bottled at a cask strength of 51.5% abv, the whisky is described as having an aroma of campfire smoke and stewed pears with flavours of candied tropical fruits and an earthy peaty tang.

The Cù Bòcan brand is named after a mythical Highland hellhound which was rumoured to haunt the village of Tomatin and was launched in 2013 as a lightly peated alternative to the traditional fruity flavours of Tomatin single malt.  This latest release follows previous limited editions including the 1989 vintage in 2014, along with the Virgin Oak, Sherry and Bourbon expressions in 2015.

‘In such a crowded market, innovation is key.  We have invested a lot of time in carefully crafting a range of different expressions to appeal to new markets and push boundaries so we are delighted with our latest offering which experiments with heavily peated Islay casks to infuse our naturally light spirit with an earthy, distinctive flavour.’

The Cù Bòcan standard edition has also recently been recognised at the prestigious San Francisco World Spirits competition scooping a silver medal in its category.

The vintage creation is currently being rolled out worldwide and retails at £199.  A list of stockists can be found here www.tomatin.com.