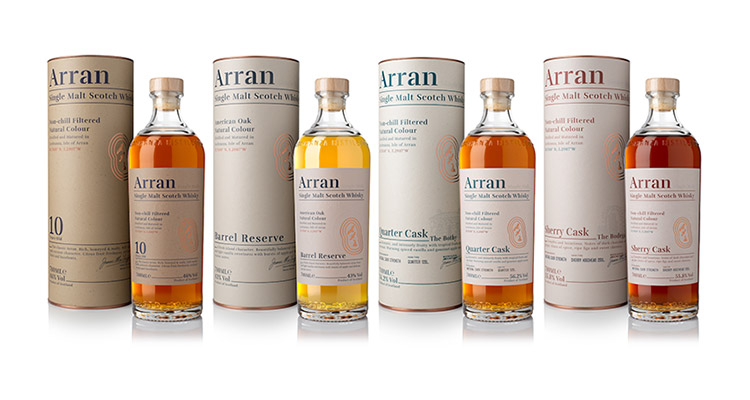 The Isle of Arran Distillers Ltd. have launched a new look across their range of Arran Single Malt whiskies, including a new logo and packaging for their core range.

The campaign, which incorporates an entirely new visual identity for the brand, is titled ‘A Breath of Fresh Arran’ and aims to showcase the natural elements and authenticity of the island malts by focusing on the unique provenance of their home village, Lochranza, where their first distillery was opened in 1995.

The contemporary new bottle design reflects the journey of the water source for the Arran Single Malts, which cascades through a series of six mountain waterfalls, each one purifying the water further. The ripples on the new glass bottles illustrate this and emphasise the pure nature of the spirit.

An updated icon, which will appear on the new bottles in copper foil, is in the shape of the island itself and features a pair of eagles, which have always been an important part of the Lochranza Distillery story. Their nesting season prompted a break in construction back in 1994 when the distillery was being built and they have remained in residence for the past 25 years.

Natural materials and colour tones are used across all brand touch points, as well as tactile emboss and delicate foiling with clean lines in order to maintain a consistent look and feel that keeps simplicity at the core.

Crucially, the liquid inside remains unchanged and fans of the distillers can continue to enjoy the authentic Arran Single Malts.

Alongside the new branding, there are also two new expressions joining the core range. Firstly, ‘Barrel Reserve’, which has a light, flexible and fruity character and the cask strength ‘The Bodega’, a Sherry Cask matured spirit that partners the award-winning Quarter Cask ‘The Bothy’.

The first four expressions in the new pack will be released this month, with bottles available to purchase from arranwhisky.com from Monday 16th September.

The opening of the company’s Lagg Distillery, their second distillery on the island which opened earlier this year, has partly prompted the re-packaging as the company now becomes the owners of two very different sites with different brand identities.

Master Blender at Isle of Arran Distillers Ltd., James MacTaggart, said: “As a company, we have grown immensely since I joined the team over 12 years ago.

“We were one of the first wave of new distillers back in the early 1990s and in June this year, we started a new chapter in our story with the opening of our second distillery at Lagg. It felt like the right time to make the clear distinction between the unique and very different spirits produced at each of our island homes.

“We’ve taken inspiration from the elements that make Lochranza so special to produce a unique and beautiful new pack, which does justice to the liquid it contains. We are very excited about the future of our original Arran Single Malt.”

<< Buy Single Malts from the Isle of Arran Distillery