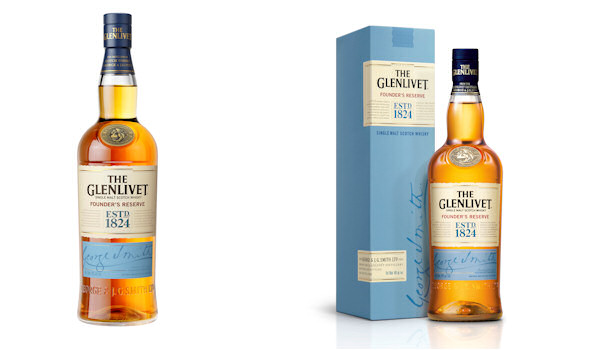 The Glenlivet has today announced the arrival of Founder's Reserve in the UK and Germany. Unveiled in October last year, Founder's Reserve is a new, permanent benchmark expression in the brand's core range that has been created as the ultimate tribute to founder George Smith's original vision to craft the most definitive, smooth single malt Scotch whisky.

With Founder's Reserve, The Glenlivet's perfectly-balanced and fruity house style is skilfully complemented with a creaminess and sweetness from the addition of First Fill American oak casks. The result is a single malt Scotch whisky of exceptional smoothness; the very quality for which George Smith's The Glenlivet was widely admired and appreciated for in his day.

This expression is presented in a clear glass bottle that draws attention to the quality of the pale gold whisky inside. The Georgian Blue carton is both classic and contemporary in style and features George Smith's signature, which provides stand-out appeal on shelf and honours Smith's original style of whisky. Inclusion of the new The Glenlivet signifier, featuring the Packhorse Bridge that crosses the River Livet, appears on both the bottle cartouche and on the lid of the carton, demonstrating the brand's rich provenance as 'the single malt that started it all'.

Nikki Burgess, Global Brand Director for The Glenlivet, said: “We are very excited about sharing Founder's Reserve with discerning whisky drinkers around the world. The expression now sits alongside The Glenlivet 12 Year Old in our global range and adds a twist of creaminess to the classic The Glenlivet style, which we are confident will appeal to whisky fans who seek out The Glenlivet's benchmark quality for single malt Scotch whisky.

“The Glenlivet has been the largest contributor to the growth in single malt over the last five years and we look forward to Founder's Reserve rolling out around the world, as its exceptional taste and link to the distillery's past are sure to help us continue our success in the future.”

Alan Winchester, Master Distiller for The Glenlivet, added: “It has been an absolute privilege to craft a whisky in tribute to the man whose talent, dedication and vision for creating the definitively smooth single malt has led to The Glenlivet style that we know and admire today. In marrying together a selection of traditional and First Fill American oak casks from our inventory, I have been able to craft a complex whisky in The Glenlivet style with a pronounced creaminess, sweetness and smoothness that I am sure George would have approved of.

“For me, the nose has delicate aromas of citrus fruit and the sweet palate imparts zesty orange and toffee notes alongside classic The Glenlivet pear flavours, which is followed by a long, creamy and smooth finish. I'm really eager to hear what our fans old and new think about our latest interpretation of The Glenlivet through Founder's Reserve and look forward to tasting it with them at the distillery in the coming months.”

The Glenlivet Founder's Reserve is now available at the RRP of $42 (or local equivalent) in the UK and Germany, ahead of a wider roll out throughout the year.