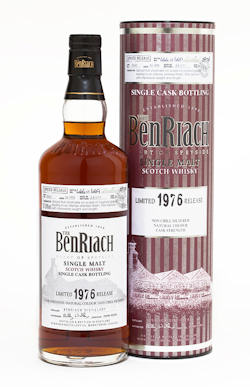 “I just had to get every new 1976 that was released, wherever that might be. Through Magnus Fagerstrom, currently the biggest BenRiach collector worldwide, I was introduced to his Japanese contact which helped a lot because soon afterwards the first 1976s for Japan were released.

“Magnus also put me in touch with his contact in Taiwan which allowed me to buy two bottles of cask 3033. I took one of them to last year’s Lindores Whiskyfest where everyone had to take and introduce one bottle. Someone else had cask 3557 which was specially bottled for La Maison du Whisky and another had the 1976 for Aston Morris with him. We tasted them and everyone liked the La Maison du Whisky bottling the most.”

It was that day which gave Serge the idea of doing his 1976 mega-tasting.

“Originally I thought I’d keep them for my fortieth birthday in 2018 but every time I told people about my tasting plans, they'd invite themselves over to my house! That’s when I thought: if people are so interested in attending, why not put all the whiskies in a huge tasting, and that’s what happened.”

The tasting was presented by Jurgen Vromas and cost €200 per person. The 19 whiskies were tasted in 4 groups, 3 consisting of 5 whiskies and at the end a blind tasting of 4 whiskies. The whiskies were grouped according to reputation which meant that the tasting would only get better as the day progressed.

Group 1 involved three peated whiskies and two sister casks bottled by Signatory. Journalist Johan van Samang from Whiskypassion magazine also attended the tasting and noted: “They were enjoyable but not exceptional whiskies - although we could taste the amazing character of BenRiach coming through.

In Group 3, they tasted three 1976s bottled for Asia and two for Europe. In this category, the Shinanoya bottling stood out for everyone.

And finally, group 4 was the best of the best, blind tasted:

Johan said: “Cask 3557 from La Maison du Whisky was expected to win, but amazingly it didn’t even make it into the top three. Gold was won by cask 3033 for Taiwan, silver for 3029 for Shinanoya and bronze for 3032 for Japan, so Asia won convincingly from Europe.

“But what 3557 and 3033 have in common is that they are really complex, more so than the others. They go deeper, they have more layers and above all they have what makes BenRiach 1976 so special - that fantastic taste of tropical fruit.”

He concluded: “This was probably one of the hardest tastings I have ever done, but it’s also one of the most interesting and definitely the most enjoyable.

“This kind of tasting won’t be repeated very often so our thanks go to Serge for his incredible drive and passion. It’s clear the passion of the few has benefited the many BenRiach enthusiasts in the Low Countries!”

(This feature is based on an article which first appeared in the Dutch Whiskypassion magazine.)