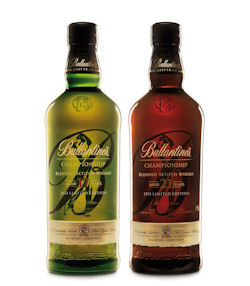 Ballantine’s, the No. 2 Ultra-Premium and Prestige Scotch whisky range in Asia and the No. 1 in Global Travel Retail, is marking the sixth year of its Ballantine’s Championship sponsorship with the launch of a brand new Ballantine’s Golf Limited Edition Pack for its 17 and 21 Year Old blends.

The new editions represent the first time in the history of Ballantine’s Golf Limited Editions that the bottles have been redesigned. Reinforcing the shared values at the heart of Ballantine’s commitment to golf and highlighting the brand’s association with the sport, dating back to 1960, the new packaging bears the striking symbolic image of a golfer and Ballantine’s iconic ‘B’.

The brand’s premium image is enhanced through specific cues, such as the gold foiling of the logo and text printed directly onto the glass and the rigid box structure, which differentiates the pack from the standard carton. In another nod to the golfing world, the 17 Year Old expression is presented in green, while the cream colour of Ballantine’s 21 Year Old uplifts the prestige credentials of the brand.

The new pack is available now, ahead of this year’s Ballantine’s Championship – one of Asia’s most prestigious golfing events – which takes place in South Korea from 25th – 28th April 2013*. Since the inaugural event in 2008, the Ballantine’s Championship has developed its own unique traditions, such as the Championship Blend and Golf Limited Edition packs, which enhance its iconic credentials, differentiate it from other golf events and give consumers the opportunity to bring home the spirit of the event.

Golf’s origins can be traced back to the 15th century on the East Coast of Scotland. Just a short distance away in Edinburgh, George Ballantine founded a small grocery business in 1827 to cater for the needs of an exclusive clientele. Since their birth, the legacies of Ballantine’s and golf have left a lasting impression around the world. The Ballantine’s Championship embodies their shared heritage and values: excellence, craftsmanship and devotion to perfection, style and flair.

Peter Moore, Ballantine’s International Brand Director, says: “ We are delighted to launch the Ballantine’s Golf Limited Edition packs for 2013, the sixth year of our Ballantine’s Championship sponsorship. We are very proud of our links to golf and to be a part of such a prestigious tournament once again. The consistently outstanding quality of Ballantine’s combined with our golf associations have clearly left a favourable impression on our customers, so we are confident that these special limited editions will be well received by whisky collectors and golf fans around the world.”

The Ballantine’s Golf Limited Edition packs are available in limited quantities with prices varying across different markets. In Travel Retail Asia Duty Free there is an RRP of $75 USD for the 17 Year Old edition, and the 21 Year Old edition will retail from RRP $123 USD.