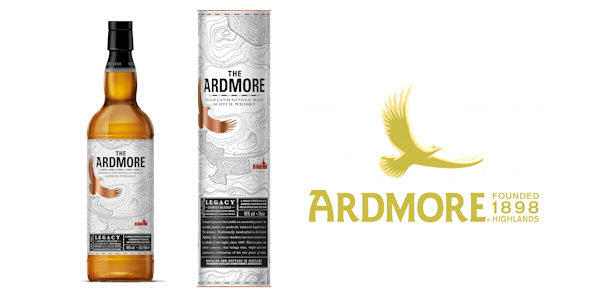 The Ardmore distillery has just launched The Ardmore Legacy, a lightly peated Highland single malt to be distributed by Maxxium UK.

The Ardmore Legacy continues the distillery’s history of producing the only traditionally peated Highland single malt whisky and will replace Ardmore Traditional Cask as its core expression.

The expression also brings a new premium look for the brand with its eagle icon firmly at the heart of the packaging design.  The bottle label and outer tube feature a splendid copper foil eagle in full flight, acknowledging their rare golden eagle neighbours and representing an adherence to tradition.  The eye-catching monochrome backdrop encompasses a map design conveying the distillery’s location and heritage.

Peter Sandstrom, Marketing Director, Maxxium UK said: “This is an exciting new expression from The Ardmore offering an exceptional Highland single malt with broad appeal.  As the only traditionally peated Highland single malt, The Ardmore Legacy has real stand out.  It is ideal for whisky drinkers looking for something new and is also the perfect introduction for any whisky drinkers beginning their journey into peated malts.”

The eagle has long played a key role in the brand’s history with rare golden eagles often seen riding the thermals above the distillery.  The Ardmore supports these birds in partnership with the RSPB, most recently with the reintroduction of the white tailed eagle, a cousin of the golden eagle.

Distilled in Scotland’s Highland region, The Ardmore Single Malt has continued its traditional ways since the distillery was founded in 1898, combining traditional methods with the very best craftsmanship to produce award winning single malt whisky.

The Ardmore Legacy (RRP £29.99) will be available to purchase at Tesco and Morrisons as well as select specialist whisky retailers from the beginning of October.