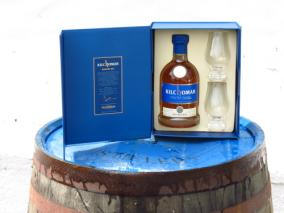 The exclusive gift pack features a 70cl bottle of Machir Bay 2013 and two glencairn tasting glasses from which to savour the mixed fruits and vanilla tones of the celebrated whisky during the festive season.

Machir Bay is a vatting of four and five year old ex-bourbon casks, with the four-year casks being finished in Oloroso sherry butts for four weeks prior to bottling. Bottled once a year, each release contains more mature casks allowing Kilchoman fans to follow the development of the unique malt as it matures.

First launched in 2012, Machir Bay has since won several prestigious awards including IWSC 2012 Gold Medal – Best in Class and Whisky of the Year at the International Whisky Competition.

Kilchoman’s portfolio now includes Machir Bay, Loch Gorm, 100% Islay and its oldest whisky to date 2007 Vintage of which there are only 10,000 bottles available worldwide.

With an ambition to take whisky production back to its traditional roots, Anthony Wills built and founded Kilchoman Distillery in 2005 on a farm situated on the rugged west coast of Islay. The first distillery on the island for 124 years, Kilchoman is one of the smallest distilleries in Scotland and one of only a handful left that still practise the traditional floor malting method.

The Machir Bay gift set is priced at RRP of £48 and is available from www.kilchomandistillery.com . Machir Bay 2013 is bottled at 46% ABV.