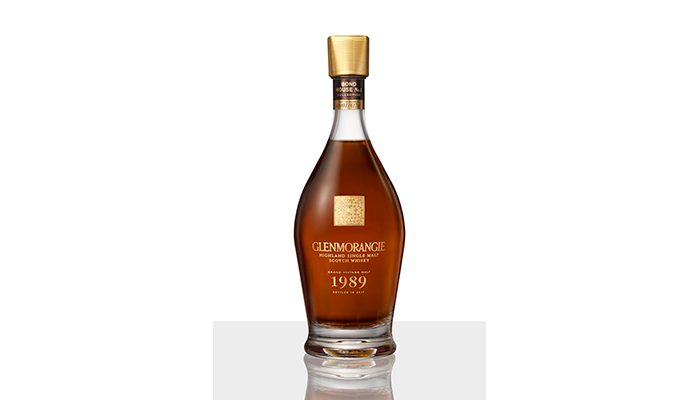 Spirit from the final days of Glenmorangie’s former still house is celebrated in the inimitable cask assemblage of Glenmorangie Grand Vintage Malt 1989, the first Glenmorangie expression to be part-matured in rare ex-Côte-Rôtie casks. This rich and complex single malt whisky is the second limited release in Glenmorangie’s prized Vintage Collection - Bond House No.1 - which explores some of the Highland Distillery’s most prestigious parcels of aged whisky. Marked for greatness from their year of origin, each expression has been captured in its prime by Glenmorangie’s whisky creators – and is deemed ready to share only at the perfect moment of maturation.

The story of Glenmorangie Grand Vintage Malt 1989 begins with some of the last spirit ever to emerge from the Distillery’s former still house, home to Scotland’s tallest stills for more than a century.  Soon after the expression’s spirit was distilled, Glenmorangie’s signature stills were moved from this venerable, yet modest-sized building, signalling the end of an era.  Instead, as the Distillery sought to meet whisky lovers’ growing desire for its single malt, Warehouse No.1, the largest of Glenmorangie’s 19th century Bonded Warehouses – and namesake of the Vintage Collection – was transformed into the renowned still house which houses the stills used today to create Glenmorangie’s spirit.

While this distinctive vintage lay maturing in the finest casks, its extraordinary flavour captured the imagination of Dr Bill Lumsden, Glenmorangie’s Director of Distilling, Whisky Creation & Whisky Stocks: he vowed to celebrate its character in a remarkable assemblage, which would honour the former still house’s legacy.  Harnessing his renowned creativity, he arranged for select parcels of 1989’s spirit to be finished in a handful of highly sought-after casks – the most prestigious of which once contained Côte-Rôtie wines.  Just as they reached their prime, he reunited these exquisite parcels in a momentous single malt, distinguished by its intriguing softness, oaky depths and hints of ripe, red fruits.

Dr Bill said: “After 27 years of patient maturation, I knew that Glenmorangie Grand Vintage Malt 1989 was ready to share.  Each cask in the assemblage had been carefully chosen to complement the exquisite depths brought to the whisky by the parcel finished in ex-Côte-Rôtie casks.  The resulting expression beautifully balances the subtle finesse of Glenmorangie’s spirit with a rare richness and intensity.  Connoisseurs will delight in its smoky and sweet aromas – extraordinarily varied for a whisky of such age.  It is peppery on the palate, with glorious, full tastes of baked apples and buttery fudge, leading to a long and powerful finish brimming with honey, notes of leather and classic wood spices.”