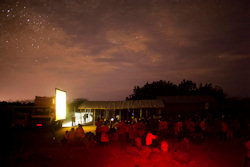 Chivas Regal, the original luxury whisky, is set to reinforce its role as official partner of the Cannes Film Festival, after extending its support of the iconic event until at least 2014.

Now in its fourth year as official whisky partner, the new agreement will see Chivas Regal build on over a decade of association with the world’s most prestigious film festival.

In 2011, Chivas Regal launched a global partnership with charity FilmAid International in the presence of FilmAid supporter and legendary actor and director, Robert de Niro. The announcement was made at Chivas House on the famous Croisette with an initial $100,000 donation.

Since then, Chivas Regal has continued its support, most notably in December of last year at the Chivas Legends Dinner held in Dubai, where business leaders and luminaries including guest of honour, Sir David Frost, took part in a silent auction raising a further £60,000 for the charity.

Cannes 2012 will see Chivas Regal reaffirm its commitment to FilmAid with the unveiling of a new short film which aims to showcase the powerful work of FilmAid in its mission to help, educate and inspire communities in need through the power of film.

“We are delighted to continue our support as official partner of the Cannes Film Festival. Like Cannes, Chivas Regal is synonymous with discerning style, luxury and legend, which makes this partnership a perfect one.”

Slack added: “Working alongside our partners FilmAid International, we look forward to bringing something special to this year’s festival, showcasing the incredible work of FilmAid and generosity of spirit at the heart of the Chivas Regal brand.”

At this year’s festival, Chivas will host film and cinema stars alongside pioneers of the industry from 18 countries for the duration of the festival which runs from 16th – 27th May.