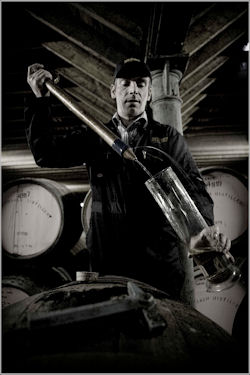 BEYONCE does Samsung and Armani, Chanel has Keira Knightley and Revlon has Jessica Biel.

And now The BenRiach Distillery Company has appointed Dumbarton-born Stewart Buchanan as its very own Brand Ambassador!

"Coming from a production background, I aim to spread a greater understanding of the different techniques used at both distilleries which give the whiskies their own unique character," said Stewart, formerly BenRiach's Production Manager.

A Brand Ambassador is the public face of an organisation who best embodies its products and services. And today, in an era of what communications experts are calling "conversation marketing", who better than Stewart who can talk for hours about his beloved malts!

He explained: "I was working in the Tobermory Distillery when Billy Walker and his associates bought BenRiach in 2005. He asked me and Alan McConnochie to come across to get BenRiach up and running and back to its original glory. I lived in the distillery for a month as I worked all hours of the day and night preparing to return it to production.

"Seven years on, Billy and Alistair raised the idea of me moving into the new role, as previously I've been on the road helping the sales boys and I think they saw the benefit of someone with such a production-orientated background being more heavily involved with the tastings and whisky festivals.

"I'll cover all markets in my new ambassadorial role, spending most of my time on the road. Our existing markets are growing, new markets are opening up for BenRiach and GlenDronach all the time and the company really needs this extra resource to support the ongoing development of both brands.”

He added: "The type of events we attend are mostly with whisky enthusiasts who are really looking for as much information as possible, so hopefully I can answer most questions thrown at me."

Tastings can range from 25 people in the back room of a pub in Glasgow to 100 people in a conference room in Japan.

He's just done a tasting for the Glasgow Whisky Club who said: "Another amazing night and very educational as Stewart Buchanan really knew his stuff and an excellent introduction to the BenRiach and GlenDronach range for those who haven't sampled it before."

He's braced for some detailed questioning at these sessions from whisky aficionados.

"Someone asked me the yield at BenRiach which is a simple answer - around 410 litres of alcohol per tonne of barley. But then his friend asked me: "How many gallons per bushel is that?" - which really had me scratching my head! But I got there eventually."

Stewart's passionate about the whiskies he helps produce and revealed that he has three or four personal favourites.

"For special occasions, my "desert island" whiskies would be the 1976 BenRiach and the 1972 GlenDronach while my day-to-day dram would be BenRiach Curiositas alternated with the GlenDronach 15yr Revival - all extraordinarily great!"