The Murray Chateauneuf-du-Pape available exclusively on Whisky.de from July 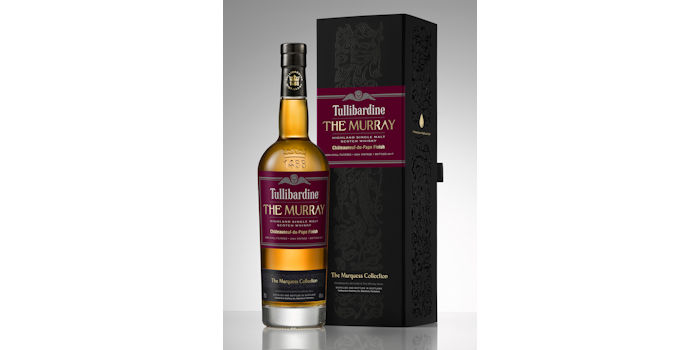 Tullibardine distillery has announced the release of the latest expression to join its range of Highland single malt whiskies, which has been finished in the finest French Chateauneuf-du-Pape wine casks.

A much anticipated sequel to the triple award-winning expression, The Murray (2004), The Murray Chateauneuf-du-Pape was distilled in 2004 and bottled this year at 46 per cent volume. After initially maturing in first-fill bourbon hogshead barrels, the new release has been re-casked in French red wine barriques from the southern Rhône vineyards.

Released as the second whisky in Tullibardine’s Marquess Collection, the expression is named after Sir William Murray, the 2nd Marquess of Tullibardine, and offers a flavour profile that draws upon the local Perthshire lands and waters.

The vintage single malt is russet in colour with an assortment of spicy and sweet aromas on the nose, bursting with flavours of juicy cherries and mint chocolate on the finish. The delicate red wine influence builds upon The Murray’s flavour and aroma, boasting red fruits, warm spices and a herbaceous aroma.

Keith Geddes, Master Blender at Tullibardine distillery commented: “The Murray Chateauneuf-du-Pape is a true example of our commitment to innovation here at the distillery.

“The Murray (2004) has been a huge success on a global level after winning three industry awards this year, and following a long process of experimentation and patience we’ve produced a delicious whisky which maintains the light characteristic of Tullibardine spirit, but is full of added complexity and depth as a result of using these classic French wine casks”.

John Torrance, Distillery Manager said: “This latest release in our Marquess Collection celebrates Tullibardine’s heritage and history, and we hope that consumers enjoy tasting it and share our excitement for its release”.

The Murray Chateauneuf-du-Pape will be available for purchase in the German market exclusively on whisky.de from July and on international release from early next year.