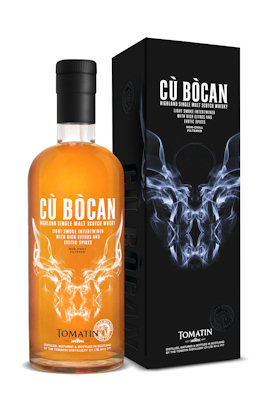 The World Whiskies Design Awards are the annual awards recognising excellence in bottle, label and pack design. Judged by an international panel of design experts, the winners were announced on Thursday 20th March 2013 at the Whisky Magazine’s Awards Presentation Dinner held at the Waldorf Hilton in London.

Released in September 2013, Cù Bòcan is a departure from the traditional Tomatin range, both in flavour - it is lightly peated - and in its contemporary presentation. Cù Bòcan (loosely translating from Gaelic as “ghost dog”) tells the story of a legendary hellhound who has been stalking residents of Tomatin for centuries, expertly portrayed by its innovative and eerie packaging.

The judges said about Cù Bòcan: “Evocative and relevant graphics designed to attract new consumers and freshen up the image of whisky. The imagery evocatively describes the nature of the product inside. This package works on many levels – it is clean, contemporary and stylish – it feels new yet, at the same time, reassuringly authentic.”

Commenting on the award, Jennifer Nicol, Marketing Manager, said: “We were clear right from the beginning of the development process that we wanted to separate our peated whisky release from the existing Tomatin brand so as not to confuse our existing customers. This allowed us to push the boundaries and experiment with a more contemporary design. We are delighted with the result; top quality and striking, reflective of the whisky contained within. The brand’s success has surpassed all expectations and we look forward to its forecasted growth with further batches and limited editions.”

The Cù Bòcan packaging was designed by Stirling based creative agency Pocket Rocket Creative Ltd. who were also celebrating on the night having won in two other categories, and winning overall with ‘Best Design Agency’. Del Sneddon, the lead creative on the Cù Bòcan project, said: “It's an incredibly exciting win and we're encouraged to see that progressive designs like Cù Bòcan are being endorsed and commended by the whisky industry cognoscenti.”

Tomatin will be releasing the first limited edition Cù Bòcan in April 2014, with several others also in the pipeline