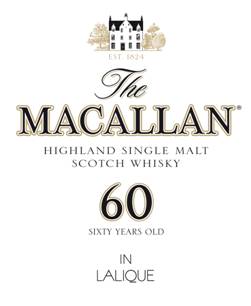 Designed and created by the legendary French crystal house Lalique, exclusively for The Macallan, the Curiously Small Stills edition is limited to 400 individually numbered decanters, making it a highly collectable and desirable item.

David Cox, Director of Fine & Rare Whiskies for The Macallan commented, “Our relationship with Lalique goes from strength to strength and this fourth collaboration further reinforces our very strong partnership. The Six Pillars, those elements which combine to give this great single malt its distinctive quality and character, continue to provide the inspiration for these stunning decanters. The addition of the Curiously Small Stills decanter continues this fascinating journey through the heart of The Macallan. The stills themselves are the smallest on Speyside, concentrating the spirit to create The Macallan’s rich, fruity, full-bodied flavours.”

“Over the years, we have drawn on the some of its oldest and rarest stocks to create extraordinary examples of this great single malt for connoisseurs and collectors alike; such is the lineage of this 60 years old Macallan, which was drawn from five sherry butts, made from a mix of Spanish and American oak, filled on 9th and 10th November 1950.”

Inspired by the artistic genius of Rene Lalique’s legacy and The Macallan’s curiously small stills, Lalique’s designers have interpreted the riveted entry hatch feature on The Macallan’s spirit stills as a circle of raised “cabochons” on the face of the decanter, creating an overall structure which is distinctly compact yet reflecting the smooth curves of the spirit stills themselves. Other defining design features of the decanter mirror the specific shapes and aspects of the still: the ‘ satiné ’ effect up the sides and shoulders to the stopper simulates the shape of the hatch handle, while the copper cap atop the crystal stopper has been made from an old Macallan copper spirit still.

Commenting on the new project, Silvio Denz, President and CEO of Lalique said,“It is once again a pleasure to team up with one of the world’s finest single malts and together create the fourth decanter in this prestigious collection. Working with The Macallan continues to allow us strong creative freedom to produce decanters grounded in the highest quality and most intricate craftsmanship.

“The Curiously Small Stills decanter has been designed by our team in Paris and crafted at Lalique’s crystal making facility in Wingen-sur-Moder, Alsace. Each piece was worked on by up to 15 craftsmen, many of whom have attained the ‘Meilleur ouvrier de France’ – the Finest Craftsman of France Award. Each decanter bears the esteemed ‘Lalique France’ signature, which symbolises authenticity and over 100 years of creativity, heritage and craftsmanship, and comes in a beautifully designed lacquer presentation box, with a crystal stopper and a collectors guide, detailing the craftsmanship that has gone into producing this beautiful object d’art.”

The Macallan and Lalique have been working in partnership since 2005. During this time they have collaborated to produce an exclusive series of limited edition decanters based on The Macallan’s Six Pillars. The first three decanters in the series have proved hugely popular with both whisky consumers and connoisseurs, as well as collectors of Lalique crystal. In 2010 the relationship was taken to new heights with the creation of the Cire Perdue decanter containing the oldest ever Macallan ever released, at 64 years old. This unique decanter and its rare contents was auctioned by Sotheby’s New York in November 2010, raising a staggering US $460,000 for charity: water, an innovative charity dedicated to providing clean and safe drinking water for people in developing countries, as well as smashing the world record price for a bottle of scotch whisky.

The Curiously Small Stills decanter is valued at USD$20,000 and is available from September 2011.