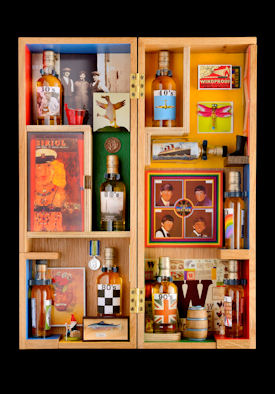 Sir Peter has a long- standing connection with The Macallan, having designed the label which adorned the first 12 bottles of the highly collectable Macallan 1926, bottled back in 1986. For this project he has teamed up with art director, David Holmes, designer of the earliest Macallan advertising campaign and creative force behind the brand’s most recent Royal commemorative limited edition bottlings, celebrating the marriage of William and Kate in 2012 and more recently the Queen’s Diamond Jubilee.

The Macallan and Sir Peter Blake celebrate eight decades consists of an oak box, divided in to eight sections, each decade having a backdrop and artefact designed, inspired or chosen by Sir Peter Blake, a miniature of The Macallan distilled in that decade (1930 through to 2000’s), with labels designed by Sir Peter and a small book of illustrations and text about Blake’s life.

The wooden box is designed to represent eight decades in the life of Blake and also The Macallan.  The artefacts* contained within the incredible box, sourced by art director Stuart Newman following Sir Peter’s guidance, represent the four elements of water, fire, air and earth, as a direct connection to the whisky making process.

Commenting on the project, Sir Peter Blake, said, “This piece is a reflection of my approach to my work, taking inspiration from the last 80 years, be it from my own art collection or my own actual work.  This project has brought together an outstanding team who have truly brought this wonderful idea to life.  Working with The Macallan has been great fun and this project allowed me to explore different ideas to create something special, unique and highly creative. ”

David Cox, Director of Fine and Rare Whiskies at The Macallan, said; “Working with Sir Peter Blake and David Holmes has been a great pleasure for us at The Macallan. They have brought such flair and creativity to the project, testament to their outstanding skill and inspiration.  This wonderful box is a true celebration of both The Macallan and Sir Peter Blake over the past 80 years, a work of art in its own right from one of Britain’s greatest living artists. We’ve selected whiskies which best reflect the character of our single malt through these eight decades.  We are confident that it will be eagerly sought after by Macallan collectors and art enthusiasts around the world. ”

With only 250 boxes for sale, this box of treasures is set to achieve high rarity value and collectability. A small number of boxes are available via www.themacallan.com and the remaining are allocated to key markets around the world, with a guide price of £4,500.

1940s
Windproof matches
Tin damsel fly – still very much alive on Speyside
Small bottle with painting of the Queen Mary, one of the first pieces of art Sir Peter Blake bought as a student in the late forties
Wellington boots – representing an original pair of Tom Thumb boots that Sir Peter has in his collection, and one of his favourites.

1950s
She Devil painting on cover of book
Halfpenny