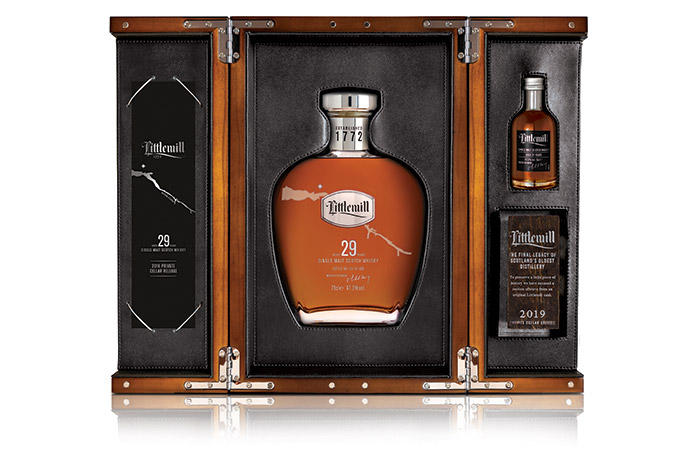 Littlemill 29 year old, the latest expression from Littlemill’s Private Cellar collection, will be released this September, using liquid carefully selected from some of the last remaining casks to be laid down at the Littlemill Distillery.

Now recognised to have been the oldest licensed distillery in Scotland, the distillery fell silent in 1994 and was destroyed by fire in 2004, making this liquid exceptionally rare and covetable.

Littlemill 29 year old (RRP £2,750; 47.3% ABV) is the third release from the Private Cellar Collection, each crafted by Master Blender Michael Henry in Littlemill’s traditional Lowland ‘floral’ style. This latest release places particular emphasis on developing the wood character and only 600 bottles will be released across the world.

The liquid is contained within a bespoke Glencairn crystal decanter etched with an illustration of the River Clyde and a silver star signifying the Littlemill distillery’s location. Situated in Bowling on the banks for the River Clyde, it would prove to be a defining factor in the distillery’s success, opening important trade routes to key cities including Glasgow and Edinburgh when the Forth and Clyde Canal was completed in the 1790s.

Hand-engraved and hand-infilled by Glencairn’s specialist in-house team, each decanter is truly one of a kind and is individually numbered for exclusivity and collectability.

The beautifully crafted presentation box also includes a 5cl miniature of the liquid, a piece of an original Littlemill cask, and a booklet sharing the fascinating history of the Littlemill distillery with tasting notes from Master Blender Michael Henry.

Master Blender Michael Henry explains how each of the Private Cellar releases have been crafted to deliver different flavour profiles while still retaining the original character of the Littlemill distillery:

“The latest expression in the Private Cellar collection helps to tell another piece of the Littlemill story. Littlemill has always represented the traditional Lowland ‘floral’ style, and over the years the distillation and maturation processes evolved to maintain this flavour profile.

“The first Private Cellar release in 2015 was designed to reflect Littlemill’s original quality and style. The second release in 2017 focussed more on the distillery influence, and by maturing the liquid in refill bourbon casks the distilling process became the main factor in defining the whisky’s character. Littlemill 29 year old, our 2019 release, focuses on the influence of wood.”

“The original liquid was laid down in refill bourbon casks in 1990. Seven of these were selected and combined, then finished in first-fill oloroso sherry and Limousin oak casks. The oloroso sherry adds further floral notes, similar to the traditional sherry casks used at the Littlemill distillery, while the Limousin oak provides the European oak influence. The result is unmistakably Littlemill, with delicious caramel sweetness layered with spice.”

Littlemill Distillery has long laid claim to an extensive and fascinating history, but new historic documentary evidence unearthed from the archives now conclusively proves that it was the oldest licensed whisky distillery in Scotland, with recent records unearthed with dates the license from 2nd November 1773.

Brothers George and Archibald Buchanan – the original owners of Littlemill – were trailblazers for the rich tradition of Scottish whisky production, and Littlemill continued to lead the industry for over two centuries. Notably, it was one of the first distilleries to have a female licensee, Jane MacGregor, in 1823. Later, in 1931, under the stewardship of the American Duncan Thomas, Littlemill was at the forefront of still innovation with technical designs that could create three styles of single malts from full-bodied to light.

Whisky production at Littlemill, situated in Bowling on the banks of the River Clyde near Glasgow, continued until the distillery fell silent in 1994 and was subsequently destroyed by fire in 2004, never to produce a drop again.