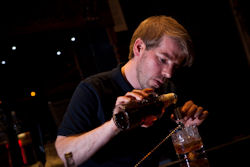 John Collingwood of No.28 in Newcastle has won first place in a nationwide cocktail challenge run by The Naked Grouse Premium Blended Whisky. His unique creation – The Bitter Sweet Grouse – triumphed at the finale event held in The Naked Grouse Boathouse by the banks of Loch Turret on the 9th July.

The competition challenged specially selected top bartenders from across the UK to create the perfect Old Fashioned whisky cocktail. The twist in the challenge was that the cocktail entries had to be crafted following an authentic recipe from 1806 using only four ingredients: spirit, sugar, bitters and water.

John impressed the judges with his complex, tasty and marketable combination. His winning cocktail contained a double measure of The Naked Grouse, 2 dashes of grapefruit bitters, 2 dashes of Angostura bitters, 10ml of The Snow Grouse whisky, 10ml of Aperol and a syrup reduction made especially for the competition using Wylam brewery beer. The drink was garnished with a twist of pink grapefruit.

Competition was extremely tight with John taking the prize by only a single point (out of 100). All the contenders went to great lengths in their attempt to create the winning drink with one using a fire extinguisher and another carefully transporting an ice ball from the south coast of England.

Wayne Collins, Maxxium UK’s leading Mixologist, who chaired the judging panel, commented:  “We have been hugely impressed by the standard of entries into our challenge. The creativity, imagination and skill shown by the UK’s bartenders has been incredible. Our aim is to create simple, authentic cocktails that let the unique characteristics of this quality whisky shine through. We were blown away by John’s creation - The Bitter Sweet Grouse - as it accentuates the whisky rather than diluting its flavours.”

John earned his place in the final by winning the Northern heat of the cocktail challenge in May.  He was joined at the final by fellow regional heat champions Ed Belshaw of World Service Bar and Restaurant in Birmingham, Mark Scott of Hyde & Co in Bristol, Jamie Jones of The Yacht Club in Manchester and Sam Sidgwick of Audio in Brighton.

This elite group were invited to go on a luxurious ‘back to basics’ themed two day cocktail boot-camp in Crieff, Scotland to decide the overall champion.  Additionally one bar per region was able to nominate a bartender based on sales over a two-month period from April to May to also attend.

The Naked Grouse premium blended whisky contains two of the world’s most renowned malts – Highland Park and The Macallan, which are then slow-matured in first fill Spanish sherry casks – the most expensive in the world. Fancy bows and unnecessary boxes have been left behind in order to concentrate on creating a new breed of Scotch that’s sherried, ultra smooth and easy to drink.

The Naked Grouse is available in contemporary cocktail and whisky bars across the UK and retail outlets such as Royal Mile Whiskies, www.masterofmalt.com, and supermarkets including Tesco and Asda priced at £28.21.