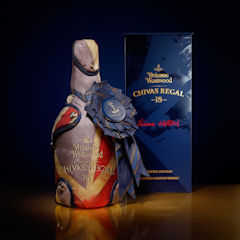 With the current design of the Union Flag dating back to 1801 and Chivas Brothers roots also being traced back to this iconic year, the distinctive bottle quite audaciously and proudly appears cloaked in Vivienne Westwood’s Union Jack print, as first seen in a Gold Label collection in Paris.

Westwood uses her expertise in tailoring and cutting, re-imagining the bottle as a figure to be adorned to create a luxurious and unique three-piece coat in true Vivienne Westwood style.

Dame Vivienne Westwood said: “I am English, so it is impossible for me to ignore British culture in my designs. It is really very satisfying to interpret some of my designs into other mediums beyond fashion.”

James Slack, International Brand Director for Chivas Regal said: “Strong British heritage and luxury craftsmanship serve as the foundation to both Chivas Regal 18 Year Old and Vivienne Westwood. The work that our Master Blender, Colin Scott, puts into crafting Chivas Regal 18 Year Old is in many ways the same to that of a fashion designer – there is a true art to what they do. As the world’s No 1 ultra premium Scotch whisky, we are delighted to work with what many would consider Britain’s most iconic fashion house.”

Chivas Regal 18 Year Old by Vivienne Westwood will be released as a limited edition with only 2,500 bottles available internationally and priced from US$495.00 duty free. The release coincides with Vivienne Westwood’s Autumn/Winter 2011 Red Label show in London.

Chivas Regal 18 Year Old is a luxurious blend of whiskies, hand-picked for their exceptional richness, including more than 20 of Scotland’s rarest single malts aged for a minimum of 18 years.