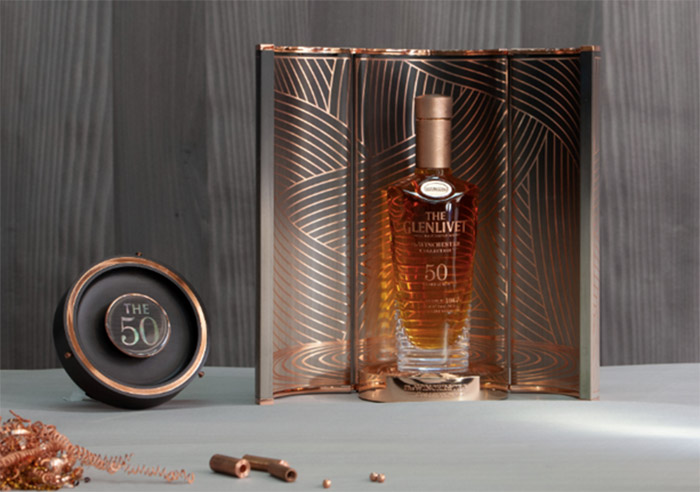 8 March, 2019 – The Winchester Collection Vintage 1967 represents the first time the brand has collaborated with a designer to create The Glenlivet bottle and display case. The maple and copper case and hand blown glass bottle were created by Bethan in response to the land around the distillery, her family history in the area and the complex whisky itself.  This collaboration signals a rising demand in the spirits market for luxury craftsmanship and elevates the bottle to a design object for collection and display, rather than consumption alone.

The Vintage 1967 is a coveted collector’s item that represents the culmination of more than 40 years of dedication and expertise from Master Distiller Alan Winchester. Retailing at USD $25,000, only 150 bottles of the Winchester Collection Vintage 1967 will be available globally. The whisky is a blend of rare single malts, the youngest of which was laid down by former The Glenlivet Master Distiller, Robert Arthur in 1967. 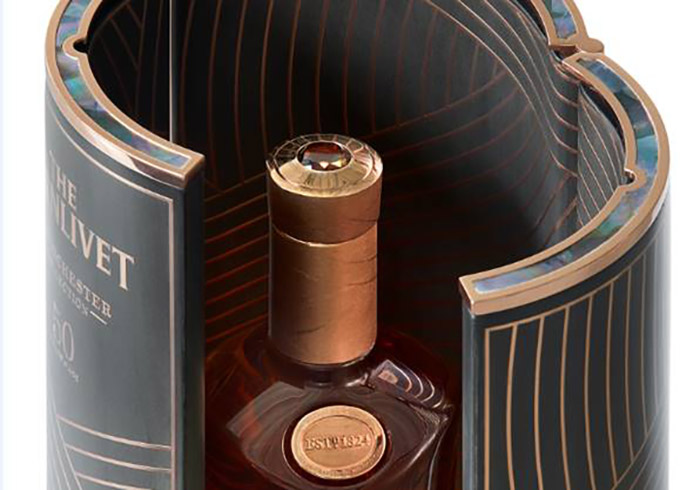 Bethan’s grandfather lived and worked as a forester in Cairngorms, home of The Glenlivet, and she was inspired by the landscape while exploring the area with Master Distiller Alan Winchester. The layers of mist that gather in the surrounding valleys became inspiration for the unique reinterpretation of her Dhow pattern that surrounds the bottle.

The Scotch whisky making process itself was inspirational for Bethan.  The bottle is glass blown by master glassblower Brodie Nairn to precisely the right size and thickness and then hand-cut, creating an ombré colour effect that mimics the ageing process of the liquid inside. It is then engraved and hand-painted, making each one unique. It is such a meticulous process that eight bottles are hand-crafted for every one that is used. 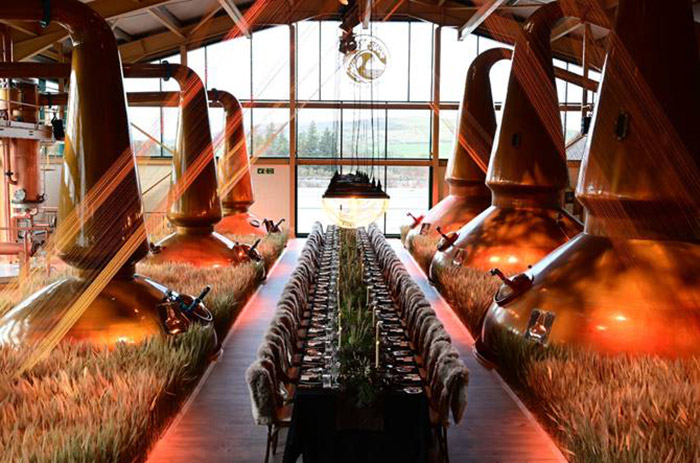 The collection was launched at an exclusive dinner at The Glenlivet Distillery, which Bethan Gray transformed for the occasion and which was catered by Michelin-starred chef Clare Smyth of CORE

The hand-stained maple case is made using solid copper overlays that reflect The Glenlivet’s charred barrels and copper stills.  Created by hand by artisans, the technique used to overlay the delicate copper was invented specifically for this case in its curved form. The mother-of-pearl inlaid into the case reflects the local freshwater pearl mussel shells indigenous to the Spey River.

The Glenlivet Winchester Collection 1967 brings together malts from a number of rare oak casks, the youngest of which was filled in December 1967.  When whisky is slowly maturing in its cask, a small amount of whisky evaporates through the wood and into the atmosphere, known as the Angel’s Share. Each year, roughly 2% of the liquid leaves the cask this way, which means that 50 Year Old whisky casks will generally have lost 60-80% of their liquid. As a result, only a very small amount of precious whisky was left for bottling in June 2018.

The whisky is non-chill filtered at cask strength, and boasts a rich and fruity nose, notes of apricot jam and sweet ripe peaches, and a hint of toasted almonds. It has an incredibly smooth taste with fondant orange and milk chocolate flavours, an amazing velvety texture and a long, and luxuriously sweet finish.

The Winchester Collection Vintage 1967 is an example of The Glenlivet’s pioneering excellence in the Single Malt Scotch Whiskey category.

<< Read more about The Glenlivet Distillery