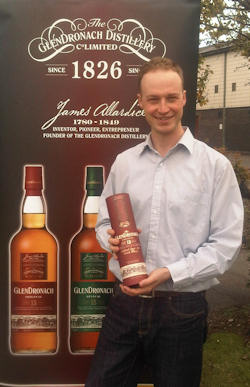 The BenRiach Distillery Company, owners of the BenRiach and GlenDronach brands, is beefing up its sales team with the appointment of Donald MacLellan.

Working alongside Regional Sales Directors Alistair Walker and James Cowan, MacLellan (29) will be responsible for developing business in new markets such as South and Central America, and Eastern and Central Europe.

He was born in Australia to Scottish parents and educated there, obtaining a Bachelor’s Degree in Business Management.

After travelling around Europe in his gap year, Donald joined Bruichladdich where he spent five years, first as Web Shop Manager and thereafter in the sales team where he was responsible for Eastern Europe and Russia which he subsequently developed into more than fifteen active markets.

Commenting on his appointment, Donald said: “I couldn’t resist the lure of working with the BenRiach and GlenDronach brands - two phenomenal malts with huge growth, especially in the last two years - and innumerable opportunities for impressive growth in the future.

“BenRiach is enormously under-appreciated by malt whisky fans. Until becoming independent in 2004 it was largely unknown on the general market as it was used primarily for blending in the past, but with over forty years’ stock – both peated and unpeated – it has huge potential worldwide.”

Donald also plans to develop BenRiach and GlenDronach’s social media accounts, such as on Twitter and Facebook.

“These give us a huge opportunity to connect with our many thousands of fans worldwide. I’ll keep all BenRiach and GlenDronach followers fully informed about news, stories, new products, tasting notes and general distillery happenings.”

Alistair Walker said: “We are delighted to have Donald on board. He brings excellent industry experience with him, and his addition to the team will allow us to further expand the availability of our malt brands worldwide.”