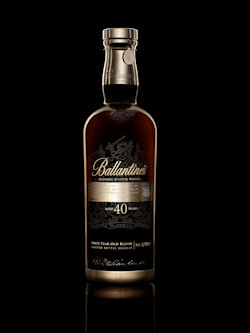 Ballantine’s, the No 1 ultra-premium whisky in Asia Pacific, is celebrating craftsmanship and expertise with the global launch of Ballantine’s 40 Year Old, its most exclusive blended Scotch whisky ever created.

Ballantine’s 40 Year Old has been created to fulfil founder George Ballantine’s aspiration to produce the most exceptional and exquisite whisky “only when the time is right.” Using small amounts of a rare inventory of aged whiskies, Master Blender Sandy Hyslop has blended together, by hand, a unique luxury Scotch in the famed Ballantine’s style.

A permanent expression within Ballantine’s award-winning range, only 100 bottles of this extremely rare whisky will be released globally each year. Individually numbered bottles will be priced at a minimum US$7,000 in recognition of the exceptional quality of the whisky, the craftsmanship of the blend and its bespoke packaging.

Ballantine’s 40 Year Old was initially introduced into Korea – the brand’s leading Asian market – in March 2012 at a gala dinner attended by 240 media and VVIP consumers. The global rollout will continue with Asia Duty Free from September, followed by other significant prestige Scotch whisky markets in Asia.

Ballantine’s Master Blender Sandy Hyslop comments: “This 40 Year Old blend is something I believe George Ballantine would be proud to put his name to. It has been an honour to realise his aspiration and to contribute towards this significant moment in the history of Ballantine’s Scotch whisky”.

Presented in a wooden cabinet, the Ballantine’s 40 Year Old bottle features an etching of the Ballantine’s crest alongside Sandy Hyslop’s signature. World-renowned British silversmith Richard Fox has expertly crafted five sterling silver elements to complete the elegant presentation - the stopper, collar, seal, label and base cup, which are each individually hallmarked by the London Assay office, the mark of silver quality for more than 700 years.

Ballantine’s 40 Year Old is a 43% ABV blended Scotch with notes of pears in syrup, rich fruitcake, cinnamon and root ginger on the nose. The liquid has a complex and fruity character and a round, smooth and perfectly balanced body that imparts flavours of toffee and sweet red apple. The finale, Ballantine’s 40 Year Old’s extraordinary finish, is significant and long lasting.