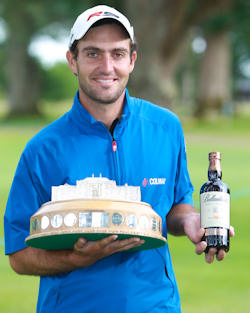 13.07.2010 - A bottle of Ballantine’s 30 Year Old whisky was presented to Edoardo Molinari in recognition of his Barclays Scottish Open victory on Sunday 11 July. The Italian champion left an impression by securing his first career European Tour crown, winning by three shots at Loch Lomond.

Molinari, who first hit the headlines by winning the US Amateur title five years ago, is now ranked 19th in the world after his 2010 Barclays Scottish Open win. Ballantine’s was a sponsor of The Omega Mission Hills World Cup, held in China, which Edoardo Molinari won in 2009 alongside his brother, Francesco.

Ballantine’s, the world’s No 2 range of blended Scotch whisky, is reinforcing its commitment to international golf with a three year extension of its official sponsorship of The Barclays Scottish Open.