Aberlour gets the consumer vote at Speyside Whisky Awards 2014 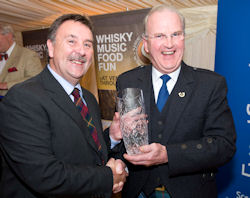 Aberlour single malt whisky is celebrating after last night (29 April 2010) winning two categories at the Spirit of Speyside Festival Whisky Awards for its 10 Year Old and 16 Year Old expressions. The awards were presented by renowned yachtsman Sir Robin Knox-Johnston at the Festival’s Opening Dinner and Dance and were collected on behalf of Aberlour by Distillery Manager Stuart Pirie.

Aberlour triumphed in the ‘12 Years Old and Under’ and ’13 to 20 Years Old’ categories in the only malt whisky competition that embraces the decisions of the consumer. The Spirit of Speyside Festival Whisky Awards are only open to single malts produced within Speyside, Scotland’s premier whisky region. The festival itself is one of Europe’s largest whisky festivals, bringing together thousands of whisky lovers from around the world many of whom also have the opportunity to judge entries to the awards.

Brand Director for malts at Chivas Brothers, Neil Macdonald, comments: “To win two ‘best of the best’ awards at this esteemed awards ceremony is exceptionally flattering and really highlights the popularity of Aberlour with whisky lovers around the world. What is great about the Spirit of Speyside Festival Whisky Awards is that ‘real people’ decide the winners – and ultimately these are the people who are buying and enjoying Aberlour.”

Selling over 2.5million bottles of Scotch per year, Aberlour is one of the most successful whiskies in the complementary malts portfolio from Chivas Brothers that includes The Glenlivet, Longmorn, Strathisla, Scapa and Tormore. It is the best-selling single malt in France, the world’s biggest whisky market.

Aberlour 10 Year Old is an elegant yet complex malt that is suitable for all occasions. Aberlour 16 Year Old Double Cask Matured was launched in 2003 and is a further example of Aberlour’s versatility when matured in sherry and traditional oak casks.