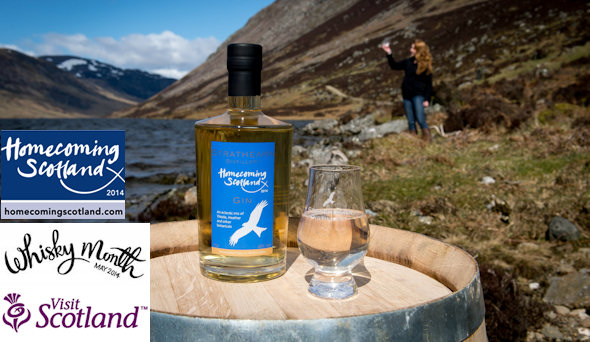 Whisky Month 2014 is just around the corner and to celebrate the month long programme of events taking place in May, Drambuie has created a new whisky cocktail recipe called the MacKinnon Punch. If whisky doesn’t suit your palate, however, the Strathearn Distillery in Perthshire has created a new hand-crafted gin especially for Homecoming Scotland 2014.

Drambuie’s whisky cocktail has also been created to coincide with the 100th anniversary of the founding of the Drambuie Liqueur Company and is described as a ‘deliciously refined drink with all the hallmarks of a classic Drambuie cocktail with an added fizz’.

To create the drink fill a highball glass with ice and pour in 35ml of Drambuie. Top with soda water and add two dashes of Angostura Bitters and gently stir. Finally squeeze in a lemon wedge and place in the drink as a garnish.

The new cocktail is the perfect accompaniment to the diverse range of unmissable whisky events, festivals, tours and tastings spread across the country during the month-long, country-wide programme of celebrations. Whisky Month invites visitors and locals to sample Scotland’s national drink as well as explore both the traditional and contemporary blend of stories, circumstances, provenance and science behind our vast array of marvellous malts.

The new Homecoming Gin, meanwhile, is set to get the country in the spirit for the summer as the country welcomes the world for the Commonwealth Games and Ryder Cup.

Using the highest quality distilled gin, the team at Strathearn prepare and infuse by hand the quintessential Scottish ingredients of thistle and heather to create the new recipe.

The gin has a delicate balance of floral and cream notes with a hint of citrus zest and is said to be best enjoyed over ice with a small amount of mild tonic and no fruit – the perfect summer aperitif.

In the meantime here are a few highlights of May’s Whisky Month programme.

Held annually during the first long weekend in May, the Festival invites visitors to celebrate Scotland’s national drink through an inventive and wide-ranging programme of whisky-inspired events – some educational, all of them fun.

A night of riotous comedy as four hapless but frightfully nice actors in evening dress gather in a 1940s BBC drama studio, where they use their skills, wit, ingenuity and 100 unlikely sound effects and props to recreate the hilarious story of the valiant people of the Island of Todday. It’s WW2 and due to rationing, there is not a drop of whisky to be had. Then the SS Cabinet Minister runs aground and the crew has to abandon the cargo - 50,000 cases of the best quality export whisky!

Come and experience the best whiskies that Scotland has to offer, with an estimated 200 different whiskies available to taste, we’re sure you’ll find some new favourites. 2014 sees the festival switch to a new venue, the iconic Stirling Highland Hotel in the historic old town in the shadow of Stirling Castle.

Glasgow’s Whisky Festival celebrates Whisky Month with a summer festival in The Arches. Enjoy a wide range of drams from the world’s biggest whisky companies, to the smallest, as part of Homecoming Scotland 2014. Dozens of exhibitors showcasing the best whiskies Scotland can offer, along with drams from around the world, make Glasgow one of the Top Ten Whisky Festivals in the world, according to Unlimted, the official magazine of the Scotch Malt Whisky Society.

Featuring a variety of concerts, ceilidhs, Gaelic lessons, distillery open days, guided walks and sporting events including golf and bowling. You will receive a warm welcome, kindness, songs, poetry, history, piping, food, classes for Gaelic song and language and more. You will be pleased you came.