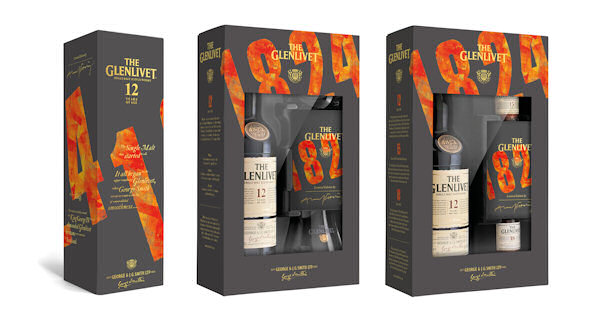 The Glenlivet has today unveiled a new limited edition gift pack series, aimed to increase on-shelf appeal for its 12 Year Old expression during the pre-Christmas gifting season. Created in partnership with Master Typographer Alan Kitching, the bold new packaging highlights The Glenlivet’s dedication to crafted quality and brings to life the heritage of the definitive Speyside malt.

Each of the value added packs contains a booklet detailing The Glenlivet’s brand story and the partnership with Kitching, which was inspired by the shared tradition, craftsmanship and skill found in both the art of letter press printing and the creation of quality, single malt whisky.

The story of The Glenlivet, which started in 1824 when George Smith founded the first licensed distillery in the parish of Glenlivet, is explored on the packaging alongside references to its rich heritage. These include King George IV’s request for “Glenlivet” by name in 1822, together with other examples of how this renowned single malt set the standard of quality and craftsmanship that went on to define the Speyside style of whisky.

Nikki Burgess, Global Brand Director of The Glenlivet, comments: “The Glenlivet has worked with Alan Kitching to create a design for our flagship expression that is both bold and eye-catching; something that will stand out this Christmas while also highlighting some of the key moments in the brand’s inspiring history.

“Letterpress printing is a traditional technique which mirrors the time-honoured craftsmanship of The Glenlivet. We have then presented the prints in an eye-catching way on pack, resulting in a contemporary gift that we anticipate will appeal to whisky fans.”

The Glenlivet limited edition gift packs will be available from December 2014 in a number of markets including US, Canada, South Africa, Portugal and Belgium, priced as per The Glenlivet 12 Year Old.