The Kingsbarns Distillery and Visitor Centre, located in the East Neuk of Fife celebrated another momentous milestone as the copper pot whisky stills arrived at 09:00 this morning (Thursday 2 October). 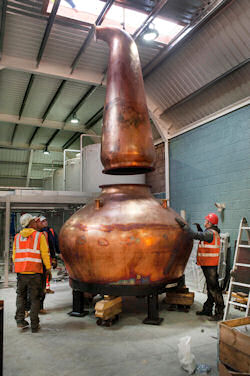 Both copper pot stills travelled from Rothes, Speyside and have been hand-made by Forsyths of Rothes.

“Our distillery and visitor centre has been a long time in the making, six years infact.  It’s only been in the past two years, thanks to a Scottish Government grant and the backing of the Wemyss Family, one of Scotland’s oldest and most established family businesses, that has turned this dream into a reality.

“Construction commenced Spring 2013 and today is hugely important in the development, with the final pieces of our distillery jigsaw, the copper pot stills, finally positioned in their new home”.

“Now that we have reached the important date of our copper pot stills arrival, we are well on our way to the final goal of producing Kingsbarns unique, light, Lowland spirit”.

Kingsbarns Distillery and Visitor Centre will open its doors to the public 1 December 2014.