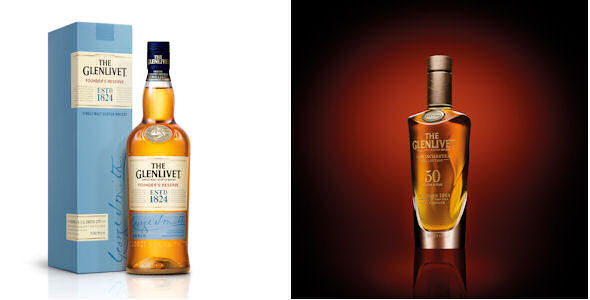 The announcement has come in the wake of an unparalleled year of growth for the brand, with new expressions and continued innovation underpinning its success.

According to Laurent Lacassagne, Chairman & CEO, Chivas Brothers, “Founder’s Reserve brings to life the heart and soul of The Glenlivet - at its core is the perfectly balanced smooth and fruity flavour that The Glenlivet is renowned for. We are very proud to introduce this new expression during what has been an incredible 12 months for the brand, and which will enable us to meet increased demand for super-premium spirits with something unique to offer.”

With Founder’s Reserve, The Glenlivet house style is skilfully complemented with a creaminess and sweetness from the addition of First Fill American oak casks, resulting in a malt of exceptional smoothness; the very quality for which George Smith’s The Glenlivet was widely admired and appreciated in his day. This exceptional new spirit will be rolling out in markets globally from March 2015, priced alongside The Glenlivet’s 12 Year Old expression.

The brand further announced last night that, in September this year, it passed the one million case milestone, capping off the stellar year of success.

Laurent Lacassagne added: “The Glenlivet has been the biggest contributor to the growth of the single malt Scotch whisky category in the last five years and, in September 2014, reached the impressive milestone of one million case sales per annum*.   This fantastic achievement is driven by a robust performance in volume but an even stronger performance in value**, which is a testament first and foremost to the high quality of our product.”

The introduction of Founder’s Reserve follows on from the recent historic release of The Glenlivet Winchester Collection, the world’s first collection of 50 Year Old single malt Scotch whiskies. Launched earlier this month, the collection is anticipated to become one of the most sought after and priceless whisky collections in the world and epitomises the brand’s commitment to innovation in crafted Scotch whisky.