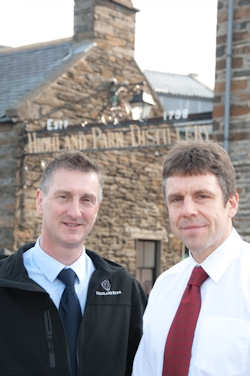 The Edrington Group has announced two significant changes in personnel for its single malt brands with the appointment of new distillery managers for both Highland Park and The Macallan.

Long serving Highland Park distillery manager Russell Anderson, is set to take the reins at The Macallan, after a total of 15 years in Orkney.  After two stints at the home of the Best Spirit in the World, Russell has handed the role of manager over to Graham Manson, a former engineering manager at North British Distillery.

Russell Anderson makes a return to Speyside, where he previously  worked as production manager from 1998 until 2000, to work alongside the production and warehousing teams as The Macallan looks to maximise the opportunities presented by the growth of single malt whisky around the world.

Graham Manson brings over 25 years of experience in the Scotch Whisky industry within the specific areas of engineering and production, working for Bell’s, Diageo and latterly North British Distillery, where he was engineering manager from 1997 until joining The Edrington Group.

Commenting on his new role, Graham said, “Having worked for North British for the past 15 years, I was seeking a fresh challenge where I could put all my skills into practice whilst genuinely making my mark on a business.  The Highland Park role presented the perfect combination for me.”

Graham MacWilliam, “These are exciting times for our single malts and these appointments are a reflection of the changing face of our distillation requirements and business needs.  Russell makes a welcome return to Speyside after many years of exceptional commitment and focus to help take Highland Park to the place it is today.  His new role at Macallan will add further resource and experience to a great team as we look to the future of this iconic brand.

“Graham is the right manager to build on Russell’s achievements and continue to drive the distillery forward.  His strong technical experience combined with his passion and energy will provide us with a first class distillery manager.”