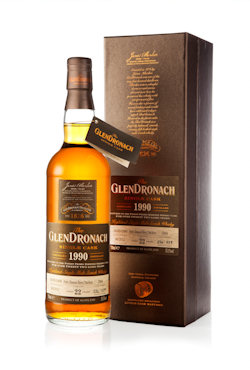 The bottling of cask number 2966, a Pedro Ximenez sherry puncheon, was voted Winner in the "Over £80" category, top Distillery Bottling and also won the big award – the coveted "Whisky of the Year" for 2012.

In a further accolade for the Aberdeenshire distillery, two other expressions – the GlenDronach 18 yo Allardice and the 21 yo Parliament – were both nominated in the "£35-£80" category, earning strong endorsements from the judging panel.

It’s the twelfth year of the awards in which forty-five of Scotland’s top whiskies went head to head to be crowned Whisky of the Year.

The Whisky Challenge team said: "Now in its twelfth year, the Scottish Field Whisky Challenge has firmly established itself as a credible guide to Scotland's very best whiskies as well as an event that is eagerly awaited by connoisseurs and whisky enthusiasts alike."

And they were unanimous that the GlenDronach 22yo was an outstanding winner. In the knockout round in the morning session, all seven voted that it should go forward to the afternoon session. Normally at least one judge demurs so for all to agree is extremely rare.

In her notes, Julie Trevisan Hunter said: “A wonderful rich palate of bitter cherries and dark chocolate” while Robin Russell declared: “It’s one for the sherry monsters. Forget collecting this one – simply buy it and enjoy.”

The judges were equally complimentary about the GlenDronach 18 and 21 year-olds which were nominated in the "£35-£80" category. The Allardice was “full bodied and rich with dark fruits, Christmas cake mix and a satisfying spicy wood flavour” while the Parliament was “an astoundingly big sherry cask whisky with lots of bodega notes, plums, bitter chocolate and a hugely long finish.”

GlenDronach Sales Director Alistair Walker said: “We’re obviously really pleased to win the big award. We release a number of single cask bottlings from GlenDronach each year, with vintages ranging from 1971 to 1996, and they are very popular. For the 1990 cask # 2966 to receive such fantastic recognition helps to underline the quality across the range of single cask releases from GlenDronach.”