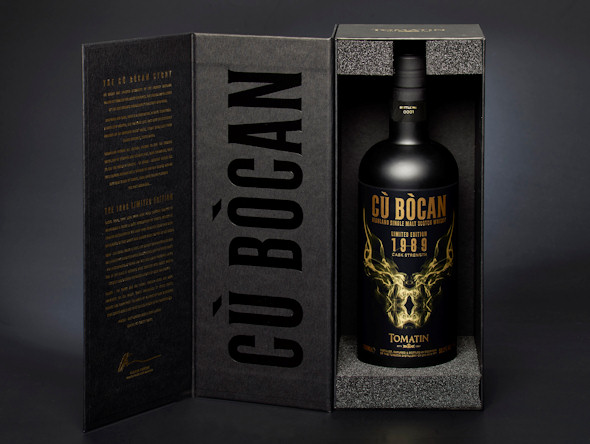 Following on from the launch of our standard batch release Cù Bòcan Highland Single Malt Scotch Whisky at the end of last year, we are delighted to announce the release of our first limited edition expression for the range.

Casks 37470, 37471 and 37472 have been lurking quietly in Warehouse 9 at Tomatin Distillery since a rare and unintentional production of peated whisky at the distillery on 7th June 1989. Now the beast has been unleashed in this sweet and smoky rare edition of Cù Bòcan.

This limited edition has been released at cask strength, non chill filtered and natural colour. The smoke is more prominent than in the standard edition but retains the instantly recognisable sweetness.

NOSE - The initial smoke is light, like distant burning kindling and has a heathery character which quickly gives way for fresh fruits – pear accompanied by citric lime zestand sweet pineapple. After time in the glass it becomes much sweeter with honey, vanilla, coconut and custard. Herbaceous notes of basil and rocket.

AROMA - The smoke and the floral heather notes are more prominent on the palate. Sweet abundance of fresh fruits; orange and grapefruit followed by blackberry and blueberry. Some ginger and clove spice is also hidden in the background.