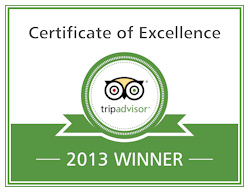 Inverness – 22/05/13 – Tomatin Distillery today announced that it has received a TripAdvisor Certificate of Excellence award. The accolade, which honours hospitality excellence, is given only to establishments that consistently achieve outstanding traveller reviews on TripAdvisor, and is extended to qualifying businesses worldwide. Only the topperforming 10 per cent of businesses listed on TripAdvisor receive this prestigious award.

To qualify for a Certificate of Excellence, businesses must maintain an overall rating of four or higher, out of a possible five, as reviewed by travellers on TripAdvisor, and must have been listed on TripAdvisor for at least 12 months. Additional criteria include the volume of reviews received within the last 12 months.

“We are very pleased to receive a TripAdvisor Certificate of Excellence,” said Graham Eunson, Distillery General Manager. “We strive to offer our customers a memorable experience, and following our recent upgrade to a Four Star Visitor Attraction by Visit Scotland, this accolade is evidence that our hard work is translating into positive reviews on TripAdvisor.”

“TripAdvisor is delighted to celebrate the success of businesses around the globe, from Sydney to Chicago, Sao Paulo to Rome, which are consistently offering TripAdvisor travellers a great customer experience,” said Alison Copus, Vice President of Marketing for TripAdvisor for Business. “The Certificate of Excellence award provides top performing establishments around the world the recognition they deserve, based on feedback from those who matter most – their customers.”