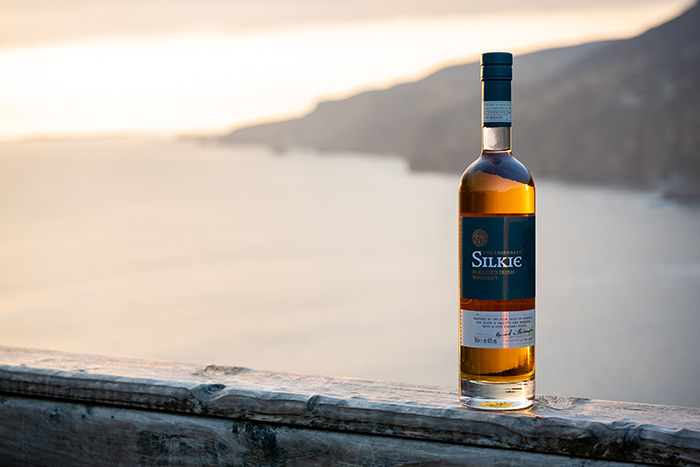 Fresh from widespread acclaim in its homeland, the award-winning and legendary Silkie blended Irish whiskey is now available to UK drinkers. Named after the mythical seals that transform into irresistible maidens when ashore Donegal’s beaches, the whiskey is as smooth as its name suggests.  Available from Master of Malt for only £29.87- Click to buy online.

Created by James Doherty, a returning Donegal ‘scatterling’, Silkie is made from a blend of carefully selected malt and grain whiskeys.  By using a higher malt percentage – with malts aged up to eight years including some sherry wood – James is able to produce a signature-soft mouth feel and silken, easy character.

On the nose, Silkie evokes brisk green apples opening to a more honeyed butteryness. On the palate, it suggests orange zest, digestive biscuits and stem ginger, all with the signature softness. The rich, sweet taste provides a sublimely gentle finish.

Commenting on the arrival into the UK, James Doherty, Managing Director, Sliabh Liag Distillers said: “As a young lad, my mother used to tell me all about the silkies emerging from the wild Atlantic ocean and beguiling the men they encountered.  We’ve worked hard to create a blended Irish whiskey that is rich, soft and very easy-drinking and are confident drinkers across the UK who encounter our Silkie will be as equally mesmerised by it as the Donegal seafarers of old were by its namesake.”

Given its soft character, Silkie can easily be enjoyed neat but also works superbly as an Old Fashioned cocktail, especially if rhubarb bitters are used instead of the traditional Angostura variety. For a more refreshing drink, a “Silkie Rua” - Silkie with ginger ale garnished with an orange peel twist hits the spot.