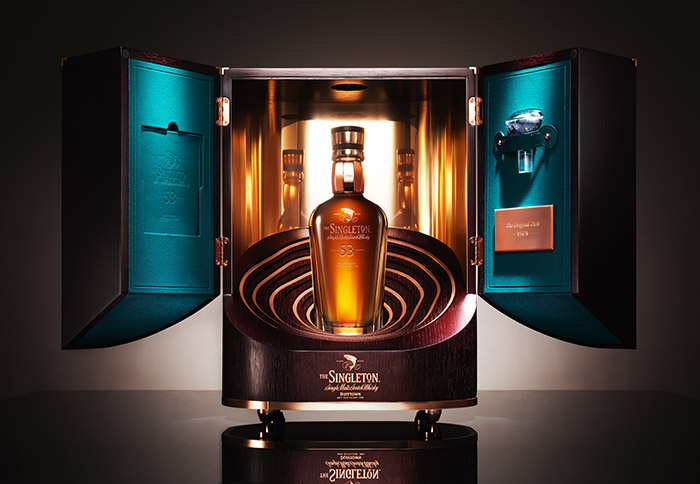 The Singleton 53-Year-Old will be presented in a crystal decanter and housed in a wooden presentation case, and a piece of the original casks will be incorporated into the design. The 117, one of a kind, collectable bottles will also be delivered accompanied by a signed certificate of ownership from The Singleton's Master of Malts Maureen Robinson.

Maureen comments: “This is a very special whisky for me. When we discovered the cask in the warehouse and tasted the whisky, we were absolutely in awe of its character. Usually in highaged Scotch, the cask can overpower the distillery character. But this had been lying there for over five decades and to our joy the distillery character had actually shone through, defying time. The finish is very elegant and sweet, and with a slight smoky, ginger spice aftertaste. It is something you do not often find; truly once in a lifetime, and it's been an honour to be a part of this series that captures the perfection that only time can achieve.”

Globally recognised whisky expert Charlie Maclean comments: “The Singleton 53 is an outstanding malt whisky - fragrant, exotic, complex and totally delicious. Long maturation in the right cask develops unique flavours which only time can manifest, and this is certainly the finest whisky from this distillery I have ever encountered. A rare privilege to taste it.”

This extremely rare and collectable The Singleton 53-Year-Old Single Malt Scotch Whisky will be available for purchase at specialty retailers this Autumn.

To bring the concept of “Paragon of Time” to life, The Singleton has partnered with internationally acclaimed artist Mr. Cai Zhi Song, winner of The Taylor Prize at the Paris Autumn Salon, to create a sculpture inspired by the first release in the series. Known as the 'Time Sculptor', Cai has blended his own understanding of time and experiences into the artwork.

Cai has entitled the sculpture 'Blossom', which features a plant called Winter Sweet that takes its time to flower, budding slowly through the season, only achieving full bloom by winter. 'Blossom' will later be auctioned, alongside a bottle of Singleton 53.