--- Whisky ‘fit for a prince’: His Royal Highness The Duke of York returns to Glenmorangie after 14 years to see his special cask go ‘down the bottling line’--- 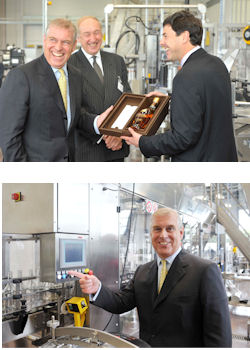 HRH The Duke of York visited the Glenmorangie Distillery in Tain, Ross-shire, in 1997, when a special cask was laid down in his name.

Now, 14 years on, the cask was bottled as a ‘Special Reserve’ when The Duke of York performed the Royal Opening of The Glenmorangie Company’s new production facility at the Alba Business Park in Livingston, West Lothian.

HRH was presented with 270 bottles, which will go to his chosen charities for auction.

The new bottling facility is part of a wider *multi-million-pound investment by The Glenmorangie Company. This has seen the award-winning** Scotch whisky creator refocus on its core brands – Glenmorangie and Ardbeg – to meet rising global demand for its premium single malts.

Paul Skipworth, President and Managing Director of The Glenmorangie Company said: “Our new production facility has been a key part in refocussing the Company to further grow Glenmorangie and Ardbeg worldwide.

“These are exciting times for The Glenmorangie Company and we are delighted that Prince Andrew was able to join us today to see his ‘Special Reserve’ go ‘down the bottling line’.”

Dr Bill Lumsden, The Glenmorangie Company’s Head of Distilling and Whisky Creation, was present in 1997 and laid down the special cask for The Duke of York.

He said: “It was great to see The Duke of York here to mark the official opening of our new production facility. I thought it might be something special when we laid it down 14 years ago but the quality of this malt has surpassed even my expectations.
“It’s a classic Glenmorangie, with powerfully accentuated fruity and oaky flavours. One might even say it’s fit for a Prince.”

The two-storey purpose-built centre features two bottling halls and has been designed with a special focus on high quality production, environmental efficiency and safety.

The new building includes environmentally-friendly technologies which allow for efficient use of energy and water including rainwater harvesting. The Company also employed an ecologist in the design of the landscaping surrounding them centre to preserve and enhance the ecological value of the site.