Euan talking about The Octave from Duncan Taylor 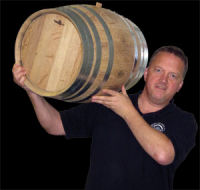 Quote from Euan: “I’m ecstatic that in my fifteenth year of maturing whiskies in Octave casks that I now have a range that actually is called “The Octave from Duncan Taylor”.

Many years ago, more years than I care to remember, I made small casks as a Cooper at Glendronach Distillery for private clients of the Distillery. I always noticed that they produced fantastic spirit over a very short period. They were fun to make and to supplement my meager wages! I began to make Octave and Firkinsize casks for friends, family and if truth be told for anyone that would buy them. I remember filling them with whatever malts I could lay my hands on from the local “off licence”. After a few months maturation the resultant spirit was totally unlike what had come out of the bottle! In fact it was hugely better, it was invigorated! Hence our strapline “Octave Invigorated”!

For those of you who like historics, I actually started producing Octaves in a commercial way around 1994, selling as far afield as Japan where there still may be a few “behind bars” up in Miyagi where most of them were sold to a delightful old gentlemen with a restaurant chain. In 1999, I produced a special Millenium Octave for, yes your right, the Millenium. If anyone has any of those still around I would be delighted to hear from you.

Our new bottlings of the 2009 maturation are now out and ready for you to enjoy.
Email me at octaves@duncantaylor.com

Read more about The Octave from Duncan Taylor