Chivas Brothers: Oscar Winning Director Takes You On A Cinematic Journey Of Friendship 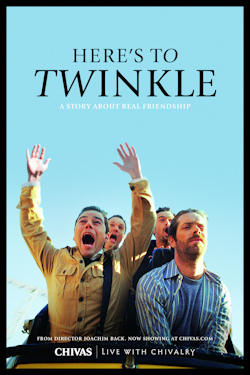 Everyone has a good story to tell about friendship: from why friends are important, to just hanging out with friends and having fun. For those of you who can’t imagine life without friends, Academy Award® winning short filmmaker, Joachim Back and Chivas Regal luxury Scotch whisky have released two cinematic films about real friends.

Each film centres around a group of four friends. Taking the audience through break-ups, breakdowns and good times, Back brings his trademark comic sensibility to celebrate real friends and the stories that bind them forever.

Here’s to Big Bear
The first film, ‘Here’s to Big Bear’, which premiers on Chivas.com on 31 October 2011, follows Joe, Sammy, Nicolas and Emilio as they find themselves stranded at a train station in the middle of nowhere after getting off at the wrong stop. Suited, booted and stranded in the desert in black tie, we follow the friends on an interesting journey that finally leads them to an awkward moment with Big Bear…

Here’s to Twinkle
The second film, ‘Here’s to Twinkle’, recounts the time when the friends came together to support Sammy during a bad break-up. The group share stories, reflect on the good times and in the end toast the welcomed arrival of Twinkle…

As the friends unite to share their escapades and memories from the comforting retrospective of the future they realise just how much friends are important.

Utilising the observational familiarity that a bond between male friends enjoy, Joachim Back has balanced the trials and tribulations of a group of successful, busy men while giving them an emotional licence that allows them to be there for each other when the chips are down. So in the words of Joachim, “If you don’t have a friend – get one!”

The films form part of Chivas Regal’s ongoing Live with Chivalry campaign which launched in 2008 and encourages men to aspire not just to have more, but to be more. Film and Chivas lovers alike can raise a glass to Big Bear or Twinkle and discover the full story online at Chivas.com from 31 October 2011.

Below is a preview of the latest advertising campaign for Chivas

<< Read more about Chivas and buy their whiskies on Planet Whiskies