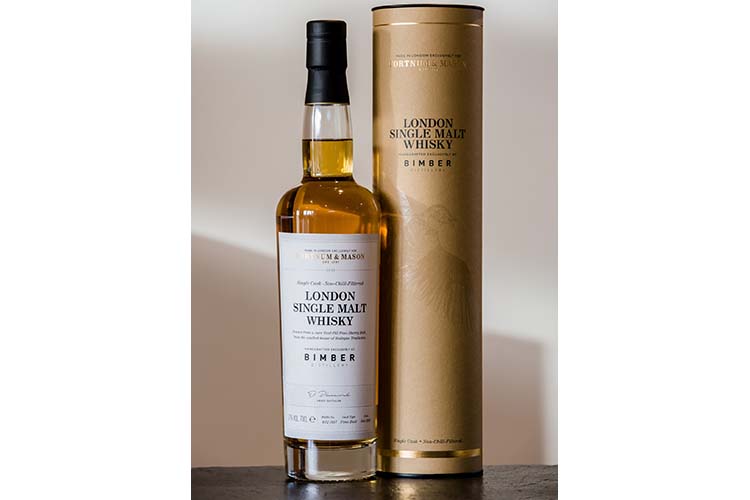 London's Bimber Distillery today announced that it has partnered with the iconic department store Fortnum & Mason to release an upcoming exclusive single cask, single malt London whisky that has been finished in a Spanish fino sherry butt.

Originally matured for over four years in American oak ex-bourbon casks, the whisky was transferred for an additional maturation in a fino sherry butt sourced from Jerez-based Bodegas Tradición who are dedicated exclusively to the elaboration and ageing of very old sherry wines. The resulting single malt offers notes of vivid fruitiness alongside feisty piquancy, a nutty edge and ripe salinity.

The release of 857 bottles at 51% ABV will be available from Friday 11th February in Fortnum & Mason's Piccadilly-based store and via the retailer's website.

The single cask release was crafted to Bimber's exacting standards. The spirit was produced from the distillery's single farm barley and malted on a dedicated floor at Warminster Maltings, before being fermented for seven days in bespoke on-site constructed American oak washbacks. Distillation took place in Bimber's customised stills which possess an increased copper surface area, resulting in a light, fruit-forward, layered new make spirit.

Bimber Distillery spokesperson Matt McKay said "We are delighted to be working with Fortnum & Mason to release our first fino sherry cask matured single malt – and to introduce Bimber's whisky to the store's many whisky lovers. This new release shows off a different aspect of Bimber's versatile spirit profile, marrying intense fruitiness with the instantly recognisable character derived from fino sherry."

Oscar Dodd from Fortnum & Mason added "Knowing first-hand the outstanding quality of Bimber's whisky, I sought a cask to add a new and unique dynamic to Fortnum's first ever London single malt. Through our longstanding relationship with Bodegas Tradicion, I was fortunate enough to source a fino butt which was shipped over to Bimber in 2021 – a Fino finish also being a first for Bimber. Ex-Bourbon casks were transferred to the first-fill butt, with 857 bottles drawn at the point of perfect harmony between the whisky's generous, sweet, fruit and nut character; and the sherry's saline freshness."