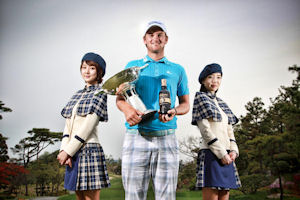 Wiesberger left Korea with the Ballantine’s Championship trophy, a winner’s cheque for €367,500 (about US$487,000) and a rare bottle of Ballantine’s 2012 Championship Blend (pictured), co-created by 2011 champion Lee Westwood and Ballantine’s Master Blender Sandy Hyslop. Wiesberger received the first of only 10 bottles produced, none of which will be sold.

“I'm going to bring back a couple of bottles of Ballantine's so they will be opened, I'm sure,” said a delighted Wiesberger. “I’d be lying if I say I'm not going to have a nice celebration when I get home”.

The Austrian closed with a nerveless round of 68 to consolidate his overnight advantage and never looked like relinquishing his stranglehold, producing a faultless display of front running.

“Every sportsman dreams about winning, especially a tournament that was so well organised and has such great players in the field,” he said. “To play the way I did this week is very special.”

The 26-year-old had already stocked up on Ballantine’s earlier in the week after receiving two bottles of Ballantine’s 21 Year Old for shooting the lowest rounds on days two and three – two successive bogey-free 65s.

That seven-under-par score was equalled by Paul McGinley and Kiradech Aphibarnrat in the third round and by Adam Scott and Richie Ramsay in the fourth – but it was never bettered.

That meant that Wiesberger – along with McGinley, Scott, Kiradech and Ramsay – also received a bottle of Ballantine’s 30 Year Old as his share of the prize for setting the course record at Blackstone Golf Club.

“I think to win a tournament, you need to have your ‘A Game’ and especially at a tournament here, the Ballantine's, where such a great field was present.”