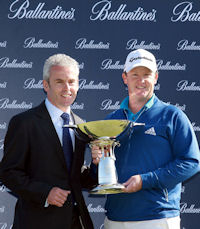 27.04.2010 - Chivas Brothers Commercial Director Paul Scanlon is pictured presenting Marcus Fraser with the Ballantine’s Championship trophy and a cheque for €367,500, following a winning performance from Fraser on the final day of Asia’s fourth biggest golf tournament.

The Ballantine’s Championship took place on the picturesque holiday island of Jeju, Korea from 22nd-25th April 2010. The largest sporting event in Korea, the tournament is now an established platform which drives Ballantine’s long-term relationship with the iconic sport.

Chivas Brothers Commercial Director Paul Scanlon commented: “As we come to the end of another hugely successful Ballantine’s Championship, we are delighted to be presenting Marcus with the trophy, after a very impressive performance, which saw him leading from day one.

Scanlon added: “This year’s tournament is historic for the world’s No 2 Scotch whisky brand*, as it coincides with the 50th anniversary of the first Ballantine’s golf tournament – which took place at Wentworth in 1960. To mark the anniversary, we have also presented Marcus with a limited edition Scotch whisky blend, created by our Master Blender Sandy Hyslop, which combines extremely rare grains and malts taken from the time of the first tournaments fifty years ago. We hope he’ll get to enjoy a celebratory dram on his return home to Australia.”

A second bottle of Ballantine’s Championship blend was auctioned for charity on the opening night of the tournament, raising an impressive $12,500 for local charity Community Chest of Korea.

Fraser stayed calm amid the blustery conditions on the final day of the Ballantine’s Championship to claim the biggest title of his career. The 31-year-old carded a three-under-par 69 at Pinx Golf Club to win the €2.2 million showpiece by four strokes. Fraser’s only previous European Tour success came seven years ago at the BMW Russian Open, a dual ranking event with the Challenge Tour, and he admitted it had been a long and frustrating wait for his next win.

“Unbelievable, I can't describe it,” said an emotional Fraser. “I just don’t know how I did that today. I’ve had so many chances to win in the last seven years, so to go out there and play like I did today and this week, it's a big relief.”

The Ballantine’s Championship was once again co-sanctioned by the European Tour, Asian Tour and Korea PGA.