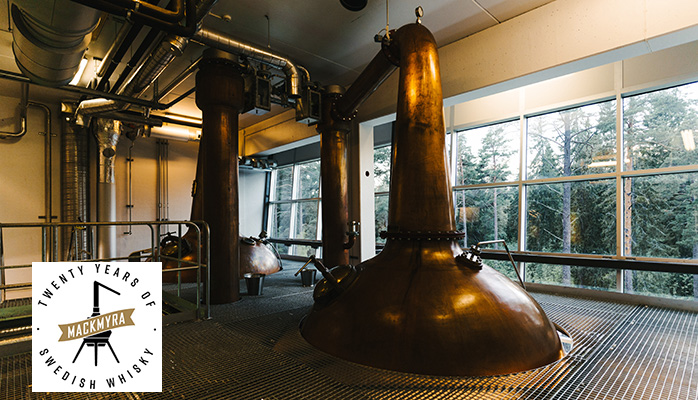 Mackmyra is turning 20 this year, both as a company and Sweden’s first ever single malt whisky distillery. Under the tagline “The Swedish Original since 1999”, our vision to be at the cutting edge and produce world-class, innovative and eco-friendly malt whisky is the same today as it was when we started. After 20 years of hard work, we now enjoy a well-deserved position as a leading distillery in the New World Whisky category.

Twenty-one years have now passed since a group of university friends reunited at the mountain cabin in Sälen. It was there and then the idea was born to create the first ever Swedish single malt whisky. With Mackmyra Svensk Whisky established one year later on 18 December 1999, distillation of Mackmyra’s first single malt could get under way. The business idea was simple: people in Sweden, Europe and the rest of the world who enjoy the finer things in life would be offered an attractive range of whisky and related products under the strong Mackmyra brand. These would be produced in Sweden using Swedish ingredients, also partly matured in Swedish oak casks.

To celebrate the twenty years anniversary, Mackmyra have a number of unique product launches during the year. These include the first whisky in the world created using AI made in collaboration with tech companies Fourkind and Microsoft. To be able to reach the world wide interest of this product, a web shop is now also available from the UK Market. Also Mackmyras 30 litre personal cask concept, will now will be launched for export.

“We produce our whisky today with the same spirit of discovery and experimental zeal we had when we started, although we now operate one of the world’s most modern distilleries – the Gravity Distillery which is 35 metres high - we use Swedish ingredients and do things our way. When running a company in the 21st century it’s vital to minimise your impact on the environment. We constantly strive to make Mackmyra whisky even more eco-friendly,” explains Magnus Dandanell.

Over the years, Mackmyra has released no fewer than 76 exciting editions, winning 117 accolades – 43 gold medals included. Thanks to the popularity of the Swedish whisky flavour profile, there are now 18,000 cask owners affiliated to the company, forming an important part of the vibrant culture of active consumer involvement the company stands for. Our anniversary year will be filled with surprises, featuring activities, campaigns and exciting product launches taking place both on home soil and the German and British markets, where the company has subsidiaries.

“We may have started the history of Swedish whisky, but there now around 77 distilleries nationwide, with many of them taking on the daunting challenge of producing single malt. Our vision to be at the cutting edge and produce world-class, innovative eco-friendly malt whisky is the same as it was 20 years ago. Working alongside our fantastic employees, customers, shareholders, partners and suppliers, we’ve achieved success. We’re now taking the next step, and looking forward to the forthcoming 20 years,” adds Magnus, CEO of Mackmyra Svensk Whisky.