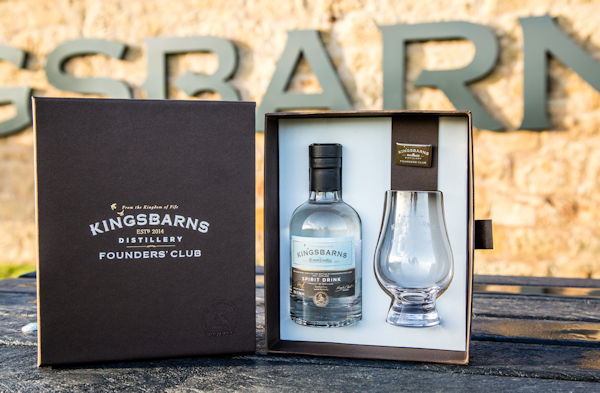 Kingsbarns Distillery is delighted to announce that its Founders' Club membership is now available to buy through an instalment plan.

The Visitor Centre was opened on St Andrews Day 2014 by the Wemyss family owners and the founder, local man Douglas Clement.   Distilling started in January 2015, with the first cask filled in March that year.  Scotch whisky has to mature for at least 3 years before it can be bottled, so Kingsbarns Single Malt Whisky won't be available until later in 2018.

The Founders' Club is an exciting chance for whisky enthusiasts to enjoy being a part of the journey for this new distillery.  The Kingsbarns Distillery Founders’ Club is open to just 3000 members worldwide. Initially, a welcome pack is sent to all members, consisting of a 20cl bottle of Kingsbarns Distillery New Make Spirit, a Founders' Club Glencairn glass, a membership badge and welcome letter.

Special members' events are also be planned, such as the Founders' Club dinner and free daytime tours on September 3rd, recently announced to the current members who will have the privilege of being the first to taste our 18 month old spirit drawn from the very first cask.

William Wemyss, one of the Wemyss family owners and Managing Director at Kingsbarns Distillery explains further: "The first ever bottles of Kingsbarns Single Malt will be bottled exclusively for members of our Founders' Club.  It is expected that some of the first casks ever filled will be selected for this first bottling around mid 2018.  Members will receive a bottle of this exclusive Kingsbarns Founders' Club Reserve, enabling them to become one of the very first to taste Kingsbarns Single Malt.  Following that, each year for 4 subsequent years, members will receive a further Founders’ Club Reserve bottle, allowing members to enjoy the progression of our single malt."

Membership is priced at £500 plus shipping charges, ranging from UK at £40, Europe at £90, USA at £160 and other selected parts of the world at £300.  Membership can be purchased in one payment or now spread over 12 months for an additional £20 administration charge.

Full details are available on the Kingsbarns Distillery website or in the Visitor Centre.


<< Back to the Wemyss Malts main page