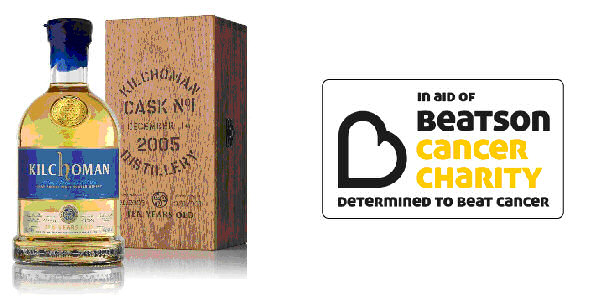 Between the 7th and 14th of December Kilchoman, Islay’s farm distillery, will auction their first ever 10 year old whisky in aid of The Beatson Cancer Charity.  Just one bottle from the first cask will be bottled and sold via an online auction with all the proceeds from the sale being donated to charity.

Established in 2005, Kilchoman was the first distillery to be built on the famous whisky-making Island of Islay in over 124 years.  Kilchoman is the only distillery in Scotland to produce whisky from barley grown and malted on-site.  The distillery has been releasing whisky since 2009 however it is yet to reach the landmark 10 years of age.

The one-off bottle will be hand bottled by Kilchoman Founder, Anthony Wills directly from Cask No1, filled on the 14th of December 2005.  Limited stocks mean that Kilchoman will not release more ten year old whisky for some years however the recent illness of Distillery Manager, John MacLellan and a desire to celebrate the milestone sparked distillery Founder Anthony Wills into planning the unique bottling.
Anthony Wills Kilchoman Founder and Managing Director “While our neighbouring distilleries have been celebrating far longer periods in the industry we wanted to acknowledge 10 years of Kilchoman and also raise some money for a very worthy cause which has become close to the whole Kilchoman team”.

John MacLellan, Kilchoman Distillery Manager “The work carried out by The Beatson Cancer Charity is exemplary in all aspects of research, treatment and after care”.

The online auction will be hosted on the distillery’s website www.kilchomandistillery.com and is scheduled run from 12 noon on the 7th to 12 noon on the 14th of December (GMT).  The auction is open to Kilchoman fans worldwide.  More information about The Beatson Cancer Charity can be found on the Kilchoman website.