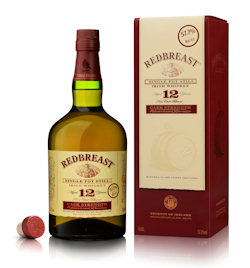 Irish Distillers Pernod Ricard is adding to its collection of Single Pot Still Whiskeys of Midleton* this weekend at Whisky Live Paris**, with the launch of Redbreast 12 Year Old Cask Strength – the portfolio’s first permanent cask strength bottling. This latest addition to the Redbreast range forms part of the company’s ongoing commitment to promote the provenance and quality of this unique Irish whiskey style.

Produced at Midleton Distillery, Redbreast 12 Year Old Cask Strength is Redbreast in its natural full-flavoured state – straight from the cask, non-chill filtered and without the addition of water. Bottled at 57.7% ABV, this first batch will be available from September 2011 in Ireland, France and Germany and in the US from February next year.

Brendan Buckley, Global Category Development Director for Irish whiskey at Irish Distillers, said: “Over the years, we’ve had great encouragement from whiskey enthusiasts and fans of the renowned Redbreast range to launch a cask strength expression, and we’re delighted to be finally releasing this incredible single pot still whiskey in response. It comes during what has been an exciting year for the range, having recently undergone a packaging revamp to freshen it up and reinforce its quality cues. We are confident that this latest development will be enthusiastically received by Redbreast fans around the world.”

Barry Crockett, Master Distiller at Midleton Distillery, added: “This is a very special single pot still whiskey, full of dried fruit flavours, with an exceedingly long finish. It is the perfect addition to the Redbreast range – representing the expression in its purest state. I’m confident that this will become the whiskey that all whiskey lovers will want to own and savour – myself included!”

Redbreast represents a style of whiskey that is unique to Ireland in general and to Midleton Distillery in particular. Single pot still whiskey is made from a mash of malted and unmalted barley, which is then distilled in traditional copper pot stills. Redbreast 12 Year Old Cask Strength, and all single pot still whiskeys from Midleton, is triple distilled.