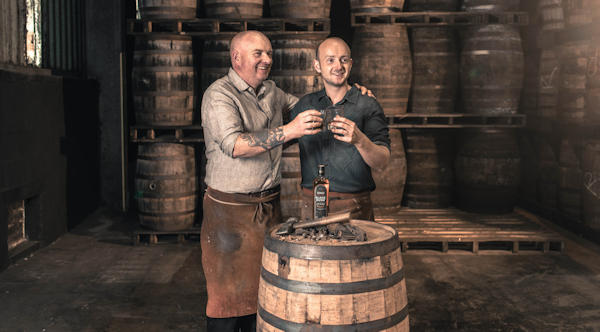 Bushmills, Co. Antrim 16th September 2016: Bushmills Irish Whiskey today marks a momentous occasion in the 400 years of whiskey making history in the area, as apprentice Chris Kane becomes the first person from the Island of Ireland to graduate as a Cooper in more than 30 years.

Chris, who hails from the village of Bushmills itself, is the fourth generation of his family to cooper casks at the Old Bushmills Distillery, totalling 140 years of family service.  His great grandfather, Jimmy Kane, started coopering in 1935, followed by his grandfather, Johnny Kane, in 1951.

Chris himself began coopering at home with his father, Alastair, at the age of nine and today he and his father keep this tradition alive as they work side-by-side in the Old Bushmills Distillery Cooperage.

It takes five years to learn the highly skilled trade of coopering.  Testament to his talent and determination, Chris took only four years to master the skills, using the same tools that his great grandfather wielded over 80 years ago.

Today the art of coopering, as is symptomatic of many manual trades, is a dying craft.  As industries become increasingly mechanised, the need for hand-craftsmanship becomes less and less relevant.

Chris explains: “It might not be an obvious career choice but coopering has been a part of my life since I was a young guy.  When the apprenticeship opportunity came up four years ago, I left what was probably deemed a good ‘sensible’ job to follow what has always been my real passion.  The wood, barrels, tools and craft, along with the opportunity to work with my dad each day, have given me the chance to contribute to the Bushmills Irish Whiskey story – it’s a dream job!”

Helen Mulholland, Master Blender of Bushmills Irish Whiskey said: “We are delighted to share in Chris’s success as he becomes a fully-fledged Cooper today.  His family has been an integral part of Bushmills’s legacy for the past 140 years.  He is a true artist, born to his craft, as the skill and attention that is required to cooper is nothing short of spectacular.  Coopering is fundamental to our Irish Whiskey making process; to ensure we produce the same premium quality whiskey that we began making 400 years ago.  With up to 80% of the character of our whiskey coming from the cask, our coopers are true guardians of Bushmills Irish Whiskey.”