Below you can also see tasting notes for this lovely malt written by BenRiach Chief Executive Billy Walkers. You can read the full press release from the distillery below.

THE BenRiach 12 year old Sherry Wood Matured single malt has been voted the best in China. 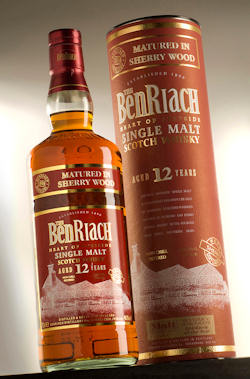 A total of 120 single malts and blends were judged for the first official guide to whisky in Mainland China and the BenRiach 12 year old Sherry Wood Matured expression, scoring 95 points, has won the Platinum Signature Award. This means that it is the best available 12 year old single malt in China according to the China Whisky Guide 2013.

The rich, aromatic Single Malt has been created in BenRiach's Elgin distillery by marrying together whiskies matured in Oloroso and Pedro Ximenez Sherry Butts sourced from Jerez in Southern Spain.

It has already won numerous awards including two trophies in the prestigious International Wine and Spirits Competition.

Billy Walker said: "We're delighted to win this new award and achieve further recognition for our expressions. China is the world's second biggest economy and it's our long-term aim to educate Chinese consumers with a desire for heritage luxury brands about our whisky culture with brands such as BenRiach, GlenDronach and Glenglassaugh."

He added: "At the luxury end, China is the biggest market in the world and the potential is vast. Western spirits currently account for less than 2% of the Chinese drinks market which is worth £42bn. Burgeoning wealth and steady urbanisation mean that this £42bn market will keep getting bigger, so we are well placed to capitalise on this growing trend and awards like this help boost our reputation."