Worlds northernmost Whisky to be released 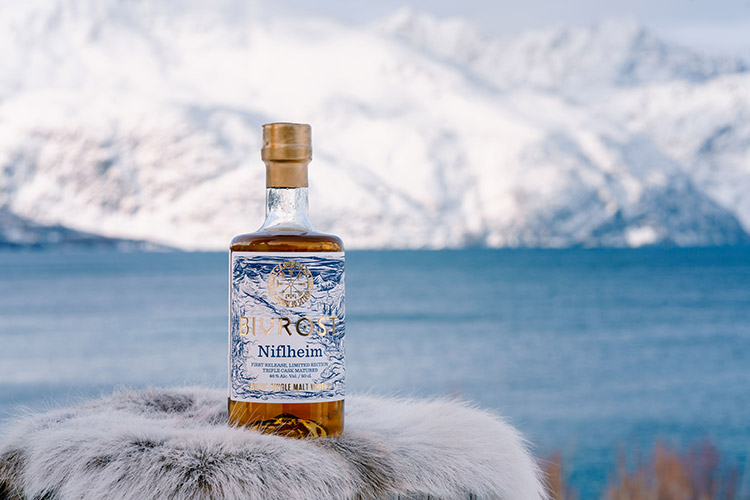 After 3 years of production, Aurora Spirit Distillery, launches their first ever Whisky in May 2020. This will be the northernmost Whisky in the world and is named "Bivrost Niflheim - Arctic Single Malt Whisky".

Bivrost Niflheim Single Malt Whisky is made from Nordic barley, pilsner malt and brewer's yeast. The water is sourced from the local spring, which receives melted glacier water from the Lyngen alpine range. The Whisky was stored in carefully selected sherry casks, virgin oak and bourbon casks. It has been allowed to mature for the required three years in underground storage vaults, which were previously part of a network of tunnels in a Cold War NATO base.

The Whisky is made by Aurora Spirit Distillery, which has established a unique distillery that attracts international attention with its spectacular location. The distillery is the world's northernmost, situated far beyond the Arctic Circle in Norway. Bivrost products are based on local herbs, berries and melted glacier water. Aurora Spirit has an award winning visitor centre which offers guided tours for visitors.

Until Aurora Spirit scale up Whisky sales with their "standard" Bivrost Whisky (Estimated release 2025) they will be releasing 2 limited editions each year as a "collectable series", related to "the nine worlds of Norse mythology". First one out is Niflheim ("world of fog"). This world is the homeland of darkness, cold, mist, and ice by ancient Viking beliefs. The brand name Bivrost is more than 1000 years old. The producers' Viking ancestors named the northern light "biv rost" (shaking path) - they thought it was a magical bridge between the worlds.

The different Whisky releases will have different taste impressions. Niflheim is fruity and sweet on the nose. On the palate it has a nice balance of sweetness, wood and spiciness, with a long and sweet finish. The use of small casks has enabled this whisky to mature beyond its youth. (Also see Whisky Author Blair Bowman's opinions below). The first 20 Whiskies will go on auction late April (www.whiskyauctioneer.com). The producer will arrange an online streaming event on the 23. Of April, with digital tasting, presentations and live music. Find out more on their Facebook page.