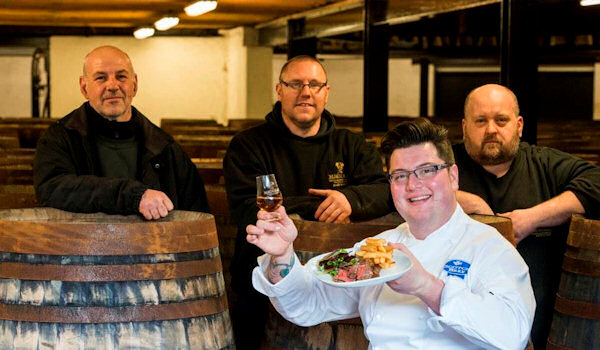 Jamie, who is head chef at Rocca Restaurant, St Andrews, joined staff at The Macallan distillery in Speyside to raise a glass of one of world’s most iconic Scotch whiskies to the success of the campaign, which aims to very clearly differentiate Scotch Beef.

The nine week Quality Meat Scotland campaign, which kicks off this week, has a strapline of “There’s beef, there’s Scottish beef, then there’s Scotch Beef”. It will showcase Scotch Beef and the flavour, provenance, traceability and integrity which underpin the brand’s PGI (Protected Geographical Indication) status.

Over 4.7 million consumers will be targeted across Scotland and Greater London during February and March to inform, educate and inspire them to use Scotch Beef when they cook.

Jamie, who selected Scotch Beef as the main course for the final of MasterChef, donned his chef whites to serve up a delicious Scotch Beef dish at The Macallan Distillery to toast the launch of the campaign.

Jamie said: "Scotch Beef is a premium product and I am not surprised in the slightest that it has been named Scotland's favourite food.

“I want to help share our love of Scotch Beef with consumers across the UK especially given that 2015 is Scotland's Year of Food and Drink.

"It is such a versatile product and although it is simple to cook with, it is also very impressive which is the main reason I chose to include it in my final dish on MasterChef and feature it regularly on the menu at Rocca St Andrews. I always look for the Scotch Beef logo so I know I'm getting the best."

Laurent Vernet, head of marketing at QMS, said: “By targeting professionals, food enthusiasts and busy families alike, this campaign aims to show just how simple and versatile cooking with Scotch Beef can be. It is an every day premium product that can be enjoyed as part of a healthy, balanced diet.

“By choosing Scotch Beef, we want consumers to know they are choosing the best product out there in terms of quality, taste and provenance.. Scotch Beef is also underpinned by one of the longest-running quality assurance schemes in the world.”

PGI status guarantees the meat is sourced from selected Scottish farms that must adopt best practice regarding animal welfare and natural production methods. The PGI is a guarantee of a genuinely authentic product.