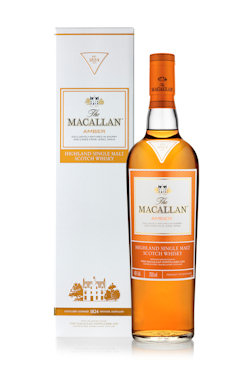 The Whisky Shop today (Friday 1st November 2013) crowned The Macallan Amber as its Whisky of the Year 2013.

The single malt is part of The 1824 Series which showcases two of The Macallan’s greatest strengths: oak sherry casks and natural colour.  The Macallan Amber was selected from The Whisky Shop’s extensive range of over 300 whiskies based on a combination of customer choice, sales and recommendations from store managers.

With 22 stores across the UK including new premium flagships in London’s Piccadilly and on Manchester’s Exchange Street, The Whisky Shop has over 3 million customers each year and is the first retail store in the UK to provide a dedicated platform for some of the world’s most exclusive whiskies.

The premium drinks emporium provides an experience which is luxurious, accessible and educational to whisky novices and connoisseurs, leading them on a journey of discovery and celebrating the heritage and craftsmanship of the product.

The Whisky Shop’s Piccadilly flagship is widely regarded by the industry as the leading specialist whisky retailer in the world.  The store recently fought off competition from the new Burberry global flagship on Regent Street and the bespoke Christian Louboutin boutique in Selfridges to scoop a prestigious retail design award.*

Priced at £59.99, The Macallan Amber underlines the signature style of The Macallan embracing the defining elements which have made it one of the world’s truly great single malts.  For the 1824 Series, The Macallan Whisky Maker, Bob Dalgarno, created four expressions by identifying the natural colour formed during maturation in different cask types to create the character informed by these colours. The expressions are Gold, Amber, Sienna and Ruby, all names reflecting the actual colour of the whiskies in the range, but also describing naturally occurring mineral and metals.

Ken Grier, Director of Malts, Edrington, commented: “We are delighted to receive this award for The Macallan Amber.  Amber is the second expression in our new 1824 Series of four single malts and is the perfect combination of two of the most influential factors which make this single malt whisky amongst the most distinctive and desirable, namely sherry seasoned oak casks and natural colour. The Macallan Amber, by name and appearance, boasts a floral, citrus and sweet vanilla nose with hints of toffee apple, cinnamon and ginger, finishing with soft fruits and subtle oak lingering.

“This recognition is testimony both to this innovative approach to whisky making of taking colour as the basis for shaping these whiskies, and to the long experience of our Whisky Maker, Bob Dalgarno.  As some 60% of the aroma and flavour of The Macallan derives from the oak maturation casks, Amber truly demonstrates the critical role of our exceptional casks.”

Andrew Torrance, Managing Director of The Whisky Shop, said: “Although it was only launched earlier this year, The Macallan Amber has already established itself as one of our leading single malts.

The Macallan Amber is available from The Whisky Shop’s 22 stores nationwide or online at www.whiskyshop.com