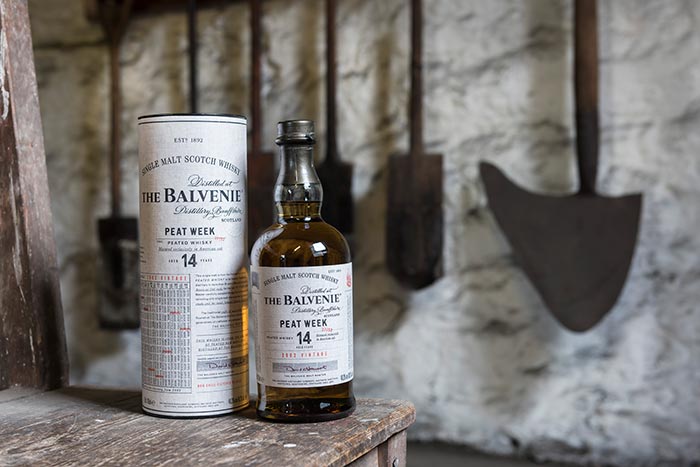 At a time when very few Speyside distilleries were using peat in production, The Balvenie distilled a batch of heavily peated malt, which was laid down to mature at the distillery in Dufftown, Scotland under the watchful eye of the industry’s longest-serving Malt Master. Since this pioneering moment, the distillery has dedicated one week each year, named Peat Week, to using only peated barley in its production, in order to craft a different style of The Balvenie liquid with enhanced smoky notes.

The result of the initial experiment is a classic honeyed whisky enriched with a delicate, sweet and lingering peat smoke that unlocks flavours unexpected from a Speyside distillery and showcases The Balvenie’s truly innovative and forward-thinking nature.

The Balvenie Peat Week (2002 Vintage), released in September 2017,is a single vintage bottling, limited and rare by nature. This non-chill filtered expression, bottled at 48.3% ABV, will launch exclusively to the USA, UK, Denmark and Sweden in September. The liquid was matured solely in American Oak casks, giving the final spirit a velvety and round taste with the peat smoke balancing oaky vanilla and honey.

Commenting on the release, David Stewart MBE says: “Being able to experiment with different elements of whisky making and stock management is one of the most exciting and important parts of my job. The new Peated Week bottling is a result of our continued efforts to innovate and trial flavours not typically associated with The Balvenie. The expression is testament to the freedom we enjoy as a family company, and shows The Balvenie in an unexpected way, yet still remaining true to the distillery style our drinkers enjoy.”

The new release pays special homage to a time when peated whiskies were commonly produced by distilleries across Speyside, including The Balvenie, who utilised locally sourced peat throughout the 1930s, 40s and 50s to dry barley processed at the distillery’s traditional malt floor, which is still in use today. 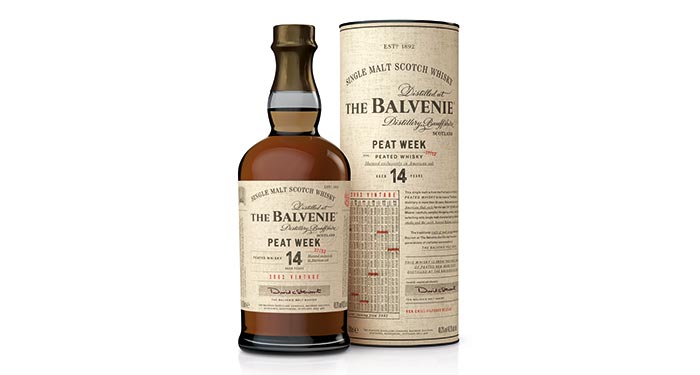 Ian Millar, says: “When we first started the experiments it was an incredibly exciting time as very few Speyside distilleries were using peated malt in production. Along with cask type, there’s nothing quite like peat to change the flavour profile of a whisky, so it was great to have the chance to undertake these experiments and lay the foundations for future peated malts.”

Alwynne Gwilt, The Balvenie UK Brand Ambassador added: “For anyone who thinks that Scotch is a staid category, this new release from The Balvenie will make them reconsider. Behind the scenes at whisky distilleries like ours, experiments are always going on and almost 15 years ago, we started exploring what it would be like to peat the malt that goes into our gorgeous honeyed liquid for one week each year. The result is something wonderful and will give The Balvenie lovers a chance to see this delicious whisky in a different light.”

The release follows the June release of The Balvenie Peated Triple Cask Aged 14 Years, exclusive to travel retail. Both bottlings will be permanent additions to The Balvenie’s existing range.

The Balvenie Peat Week will retail for £60 RRP and is available from September.

Taste: Velvety and round to taste with the peat smoke balancing citrus flavours, oaky vanilla and blossom honey

Finish: Gentle smoke with a lingering and creamy vanilla sweetness

<< View single malts from The Balvenie

<< Read more about The Balvenie Distillery